Volkswagen has resurrected the legendary Microbus with some modern engineering and tons of electricity. No, this is not Frankenstein but instead, it’s the new Budd-e concept; a new all-wheel driven electric-powered MPV which debuted at the Consumer Electronics Show in Las Vegas.

The Budd-e concept is VW Braunschweig R&D’s (Volkswagen’s EV specialist) first creation, a move that follows in the footsteps of subsidiaries Audi and Porsche. The Budd-e’s shape is an inspiration from the earlier Bulli concept back in 2011. Based on Volkswagen new MEB platform (short for Modular Electric Platform) that’s specially crafted for their EVs, the concept’s dimension is at 4,597mm long, 1,940mm wide and 1,835mm tall. Wheelbase is considerably lengthy at 3,151mm.

The Budd-e concept is powered by two brushless electric motors – one at the front and the other at the back. Together, both motors generate 302 hp and 490 Nm of torque. Performance for this MPV is impressive; Volkswagen claims it’ll do the century sprint in under 7.0 seconds, whereas max speed is rated at 180km/h. These numbers can certainly match any modern internal combustion engines, but it does so without producing any sort of greenhouse gasses!

Volkswagen has also developed a new lithium-ion battery technology which improves the range of up to 532km (based on European test cycle). Underneath the MPV lies a 94.6 kWh battery pack which is integrated within the floor structure. The battery boasts fast charging capabilities and is apparently able to reach from 0 to 80 percent charge in just 15 minutes!

On the inside, a flat digital instrument is seen, which looks like an extension of Virtual Cockpit as seen in recent Audis. In fact, it’s an internet-enabled infotainment hub that will reportedly be integrated into the standard gauge cluster and infotainment system.

Also to note: buttons are a thing of the past, according to this concept. They’re replaced by gesture controls and smooth touchscreen surfaces. This means the passenger’s hand motions could be used to operate the car either by opening the Budd-e’s doors, starting the engine or activating the seat ejection to rid of the passenger you hate most. We’re kidding with the last one, though.

Not only that, but the Budd-e’s onboard tech can also send reminders to the driver or passengers via their mobile devices should they leave any personal belongings in the car. The standard rear view mirror is gone too, and it’s replaced by an “e-Mirror” that feeds visuals from the rear through dedicated display panels.

The future for this Budd-e concept is surely a budding one, and could well pave the way for how families will be transported in the future. Volkswagen’s iconic models such as the Beetle and the Golf have already received their successors, and it’s about time the Microbus gets one. We hope the Budd-e will be that. Fingers crossed! 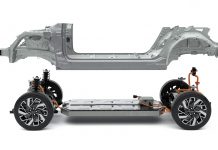 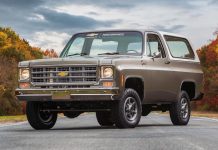 Kia’s new logo will debut in 2021, driving its shift towards EV