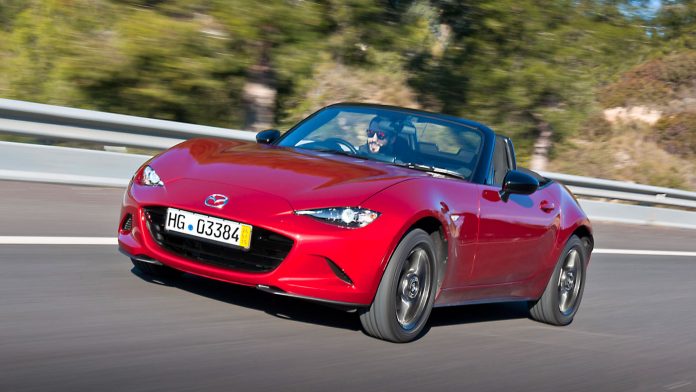 The Mazda MX-5 or Miata, as it’s affectionately known to some markets, will be finding its way here come August this year carrying a price tag that is believed to be well over the RM200k mark, according to sources from Bermaz Motor.

Fans of the popular Japanese droptop coupe can look forward to getting the more powerful 2.0-litre Skyactiv-G (158 hp and 200 Nm) variant as opposed to the smaller 1.5-litre four-pot (129 hp and 150 Nm) mill. Say what you will, but no manual transmission will be offered, so Malaysian customers will have to make do with the six-speed Skyactiv-Drive automatic gearbox (with blipping function and Sport Mode) driving the rear wheels. And because we’re getting the 2.0-litre mill, limited-slip differential comes as standard.

The MX-5, now in its fourth life cycle, adopts the company’s Kodo design philosophy and benefits from extensive use of aluminium and high-tensile steel, resulting in an overall kerb weight of between 990 to 1,060 kg! Mazda also claims that the Roadster achieves a perfect 50:50 weight distribution, achieved partly by positioning the engine behind the front axle.

Tasked with providing feedback to the driver is the new dual pinion electric power steering – a Mazda first. With or without the soft-top, the driver and its passenger can immerse themselves in the nine-speaker Bose AudioPilot sound system. There’s also a suite of driver’s convenience and safety features, such as Blind Spot Monitoring System, High Beam Control with Adaptive Front-lighting System, Rear Cross Traffic Alert, Lane Departure Warning System, MZD Connect System with 7-inch screen and GPS navigation.

Granted, some of the features mentioned here may not make it into our MX-5s, but by the looks of it, the tentative pricing seems almost justified. While we’re at it, let’s also not forget the fun-to-drive element it promises. We’ll be reviewing the MX-5 following its local launch in August, so stay tuned for its latest developments!