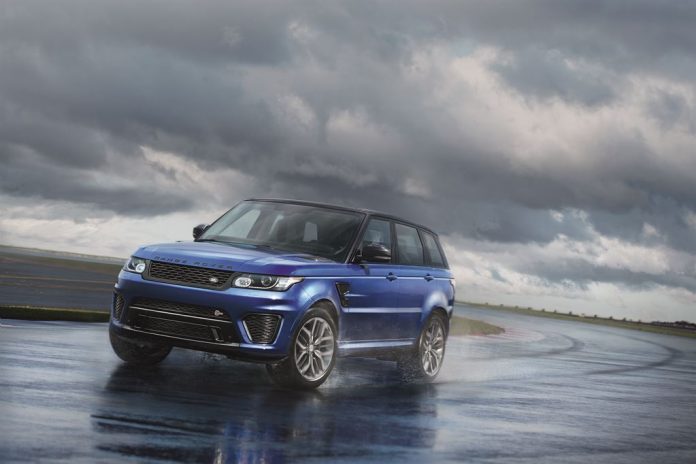 First images of the fully undisguised Range Rover Sport SVR has been released. Already teased at Goodwood Festival of Speed in June, the Range Rover Sport SVR has subsequently set a Nürburgring Nordschleife lap time of 8 minutes 14 seconds, thus ranking it as one of the fastest production SUV to lap The Green Hell. Developed by Jaguar Land Rover’s Special Vehicle Operations (SVO) team as the sportiest Range, this is Land Rover’s first vehicle to wear the SVR badge on its tail.

The 5.0-litre supercharged V8 has been massaged to deliver an additional of 40 hp and 56 Nm of torque resulting a total of 542 hp and 680 Nm of torque. Power is sent to all four wheels with 50:50 torque split front and rear via a ZF 8-speed automatic transmission. Sprint from 0 to 100 km/h is clocked at 4.5 seconds, while the top speed is limited to 260 km/h.

The exterior features unique aerodynamic front apron, bigger side vents, body-coloured side skirts, and a new rear bumper with integrated diffuser and quad tailpies. The SVR is the first Land Rover to be fitted with a two-stage active exhaust, featuring electronically controlled valves that ensure a suitable noise is provided in accordance to the engine revs.

A new set of 21-inch alloys with all-season rubbers are standard equipment, but buyers can opt for a set of 22-inch alloys wrapped in Continental SportContact 5 tyres. The SVR is equipped with an upgraded air suspension system that automatically changes between two ride heights, and a clever Terrain Response® 2 system will automatically select the most suitable terrain programme in any weather condition.

The suspension system has been tuned with the inclusion of Adaptive Dynamics that constantly monitor the vehicle movements and adjusts the continuously variable magnetorheological dampers to suit the road surface. There’s also the two-channel Active-Roll Control (ARC) to help keep the Range Rover Sport SVR flat when cornering, by replacing the traditional anti-roll bars with actuators powered by a hydraulic pump.

Most of the interior are carried over from the Range Rover Sport, but sportier carbon fibre trim is offered as option and there are new sports seats front and back with SVR logos stamped on the Windsor leather.

Even though the Range Rover Sport SVR is the fastest and most powerful Land Rover ever produced, the SVR still keeps its 850mm wading ability from the normal Range Rover Sport, and it is also capable of towing loads up to 3,000 kg.

The fully undisguised Range Rover Sport SVR will make its global debut at 2014 Pebble Beach. In the UK the SVR is priced from £93,450 and customers can start booking their cars from October 2014. Deliveries will commence from Q1 2015.