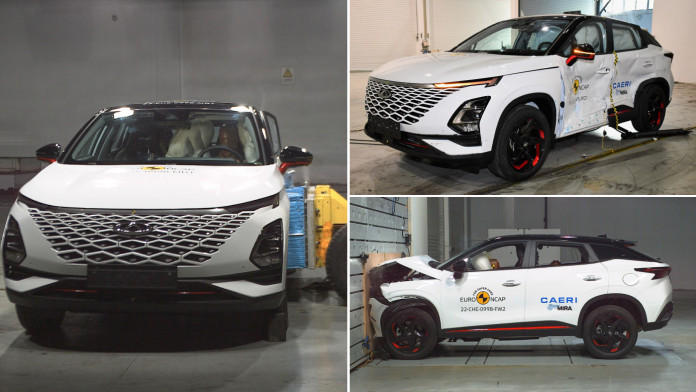 Europe’s vehicle safety assessment entity, European New Car Accessment Programme (Euro NCAP), has just released its final list of cars it has tested for 2022. Among the list of 14 was the Malaysia-bound Chery Omoda 5, which scored a full five stars in the Euro NCAP rating.

The Chery Omoda tested in the Euro NCAP results listed a left-hand drive Lux variant with a 1.6-litre turbocharged engine and 4X2 drivetrain, although the rating will be valid for both left-hand-drive and right-hand-drive versions.

According to the report, the Chery Omoda 5 performed competently for occupant protection in most of the crash tests, with the best result coming from child occupant crash tests, scoring 23.7 points out of a total possible 24.

The lower vulnerable road users score, meanwhile, was primarily caused by some poor results for pedestrian protection recorded on the stiff windscreen pillars, and at the base of the windscreen. The test comments also noted that the bumper offered good protection to pedestrians’ legs, but protection of the pelvis was mostly poor.

The test notes does mention that the autonomous emergency braking (AEB) system on the Chery Omoda 5 does respond well in response to pedestrians and cyclists, with collisions avoided in most cases, which also helped bring the score of the safety assist systems tests to a fairly high 88%.

The lane support system has been noted to “gently correct” the vehicle’s path if it’s drifting out of lane, and also intervenes in some more critical situations. Meanwhile, the camera and digital mapping-based speed limit warning, as well as the in-car driver fatigue detection system, has gained the Omoda 5 some extra points.

Chery has recently previewed the Omoda 5 here in Malaysia, alongside a range of other SUVs from its Tiggo Pro line-up that are earmarked for launch in Malaysia. Here on our shores, the Omoda 5 will also be offered with a 1.5-litre turbocharged inline-four engine making 154 hp and 230 Nm, alongside the 1.6-litre variant used in the Euro NCAP tests.

The Chery Omoda 5 will be part of Chery Malaysia’s “Phase One” product plan, alongside the Tiggo 8 Pro, however a concrete timeline has yet to be provided.

For more information on the Chery models that were previewed in Malaysia, check out our previous coverage here.