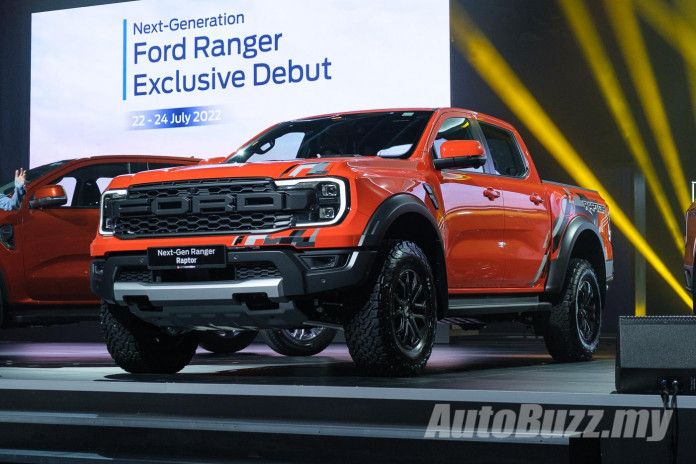 First teased in a cameo appearance during the Ford Ranger’s launch here in Malaysia, Sime Darby Auto Connexion has now confirmed that the all-new second-generation Ford Ranger Raptor will be making its official debut in Malaysia on October 7th.

Instead of being a media-only event, however, the company is also inviting the public to witness the souped up pick-up truck in action on a Baja-inspired track near the Sepang International Circuit. The launch will be open to the public from 7-9 October, and you can sign up for the launch here.

The all-new second-generation Ford Ranger Raptor has ditched the bi-turbo diesel mill in favour of a tricked-out 3.0-litre twin-turbocharged EcoBoost V6 petrol engine, borrowed from the Bronco Raptor. The new engine makes a whopping 397 hp and 583 Nm of torque, with drive sent to all four wheels via a 10-speed automatic gearbox.

However, Ford has also said that existing 2.0-litre bi-turbo diesel mill will also still be offered in selected markets. We’ll have to wait until the official launch to find out which of the two we’re getting here in Malaysia, but for some context, the Ford Ranger Raptor in both Thailand and Australia are powered by the petrol V6 engine.

Powertrain aside, the rest of the all-new Ranger Raptor follows the same basic recipe as the outgoing model – although, with everything turned up to 11. The chassis is further strengthened to withstand additional abuse when jumping over sand dunes, while the adaptive Fox shocks have also been updated to reduce friction.

As for looks, the Baja-racer-inspired pick-up truck shows off its performance knack with its massive wheels and flared wheel arches, additional skid plates on the underbody, as well as a vented bonnet up front.