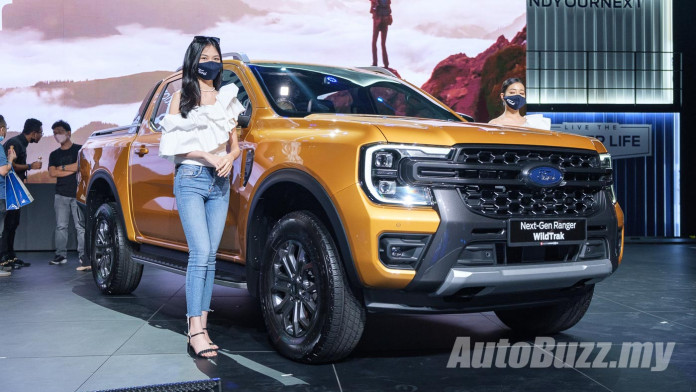 The highly-awaited all-new 2022 Ford Ranger has finally made its debut in Malaysia today, offered in seven different variants, including the XL, XLT, XLT Plus, and WildTrak. Pricing for the all-new Ranger starts at RM108,888 for the entry-level XL variant, and maxes out at RM168,888 for the WildTrak.

The Ford Ranger has been redesigned from the ground up on this all-new generation model, most notably on the bold front-end styling, characterised by the signature “C-Clamp” headlights design and massive hexagonal grille, both of which taking inspiration from the F-150.

The sides of the pick-up get a mild redesign with new character lines and reworked wheel arches, while at the back, the tailgate also sees a new debossed ‘Ranger’ word mark, alongside the new vertical taillights with intricately-designed LED light signatures.

In terms of equipment, the all-new Ford Ranger comes with the following:

The all-new Ford Ranger will be offered in two different powertrain options, both powered by the same 2.0-litre inline-four diesel engines, but in single- or bi-turbo configurations.

Ford says that both engines, alongside their gearboxes, have been put through extensive tests to ensure their reliability. The new six-speed manual transmission on the single-turbo variants is also said to have been in development for four years across four continents, featuring a new gear set for smoother gearshifts.

Other improvements come in the form of a strengthened chassis, alongside a 50 mm increase in both the wheelbase and track width to enhance the truck’s comfort and stability, both on-road and off-road. The dampers for the rear suspensions have also been moved outboard of the frame rails and springs to offer a more controlled ride, whether the vehicle is laden or not.

The drive mode selector, which was previously exclusive to the Raptor, has also now moved down the product line-up to offer up to six drive modes (depending on variant) across the board. These modes adjust various settings ranging from gearshift to throttle response, traction and stability control, as well as ABS and more.

The big changes continue inside, featuring a new “coast-to-coast” dashboard architecture headlined by the massive vertically-oriented central display in the centre. Ford says that the user interface of the dashboard has now been simplified, with many of the features being moved into touchscreen operation.

Aside from the massive central screen, the seven-inch digital instrument cluster is also standard across all variants, significantly lifting the overall modern feel of the cabin. Equipment varies according to variants, with the highlights being:

Advanced safety assistance features will be offered on the all-new Ford Ranger, starting from the XLT Plus variant and up. These features include:

Pricing for the all-new Ford Ranger starts at RM108,888 for the entry-level manual XT variant, going up to RM168,888 for the range-topping WildTrak. Prices are on-the-road, without insurance, and inclusive of a five-year/160,000 km warranty – the latter extendable up to seven-years.

Sime Darby Auto Connexion also teased the all-new 2022 Ford Ranger Raptor for Malaysia at the launch today. The Baja-inspired off-road racer will make its launch in Q4 this year.