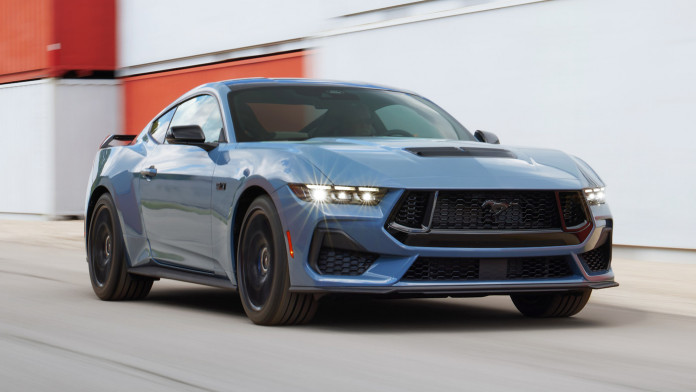 It seems that in 2022, every new is required to come with electrification of some sort. Ford is no exception, where even its pick-up trucks are getting full-electric power. But for the all-new Mustang, Ford has delightfully opted to keep it old-school – as in, the 5.0-litre naturally-aspirated V8 kind of old-school.

Ford says the new engine, dubbed the Coyote, is its “most powerful 5.0-litre V8 ever”, and will deliver the “most naturally aspirated horsepower of any Mustang GT”. Official figures haven’t been announced just yet, but the engine gets a reworked air intake, with a dual intake box and dual throttle body design that is said to help minimise induction loss.

The 5.0-litre monster is available exclusively on the GT variant, but the regular Mustang also receives an all-new 2.3 litre turbocharged four-cylinder EcoBoost mill underneath its bonnet. Ford also says that it has “saved the manual transmission” for another generation of the Mustang, although a 10-speed auto ‘box is also available.

But the coolest addition to the engine department on the all-new Ford Mustang is the new Remote Rev feature, which allows the owners to – as the name suggests – rev the engine remotely via the key fob. Why? No clue, but it sounds like the most Mustang thing ever.

In terms of looks, well, it’s still a Mustang. It still gets the same low and wide silhouette that has transcended 58 years of the Pony, and all of the signature Mustang cues, such as the tri-bar lighting, are also still retained on this all-new model – albeit with a much more prominent design on both the LED headlights and tail lights.

The grille has been enlarged, which Ford says is inspired by the original 1960s Mustang’s design, and gets even larger on the GT variant (alongside additional bonnet vents and splitters) for better airflow to the engine. There’s also a new roofline to make ingress and egress a little easier, while the rear end has been shortened to emphasise the car’s muscular stance.

Where you’ll definitely notice a difference is on the inside, thanks to a completely redesigned cockpit that’s said to be inspired by fighter jets. The highlight of the cabin is without a doubt the two massive freestanding screens on the dashboard, measuring 12.4-inches for the instrument cluster, and 13.2 inches for the SYNC4 infotainment display – the latter even has Amazon Alexa built-in for voice commands.

But the reason you’ll notice it is not just because it’s huge; the displays are also powered by the same Unreal Engine 3D software used in video games for buttery-smooth animations, and even real-time graphical rendering of your car when you customise the drive modes. You can even adjust your car’s settings by swiping the graphic to rotate the car virtually – just like a video game!

The all-new Ford Mustang will be offered in a variety of optional equipment packages, starting from a purely-aesthetic Mustang Design Series that offers additional Sinister Bronze details and alloy wheels.

Moving up to the Performance Pack will net you a front tower brace, active exhaust system, Torsen limited-slip differential, MagnaRide active suspension, wider rear wheels, larger Brembo brakes, as well as Recaro seats on the inside, plus additional brake ducts and an auxilary engine oil cooler specifically for the GT variant.

Most of you, however, will probably be more interested in the new ‘Dark Horse’ specification which, according to Ford, delivers “the most track-focused precision for any Mustang to date”. The range-topping variant comes with a “high output” version of the V8 engine, plus a variant-specific six-speed Tremec manual gearbox (auto is still available as option), additional radiators for the engine, gearbox, and rear axle, as well as reworked suspensions.

The ‘Dark Horse’ specification will also form the base of the all-new Ford Mustang’s motorsports aspirations, which will compete in all manner of racing categories, ranging from GT4 to Le Mans.

The all-new Ford Mustang will be assembled at the Flat Rock assembly plant in Michigan, USA, with sales slated to begin next year. And for you MLM agents American muscle fans here in Malaysia, yes – right-hand drive models are also confirmed.