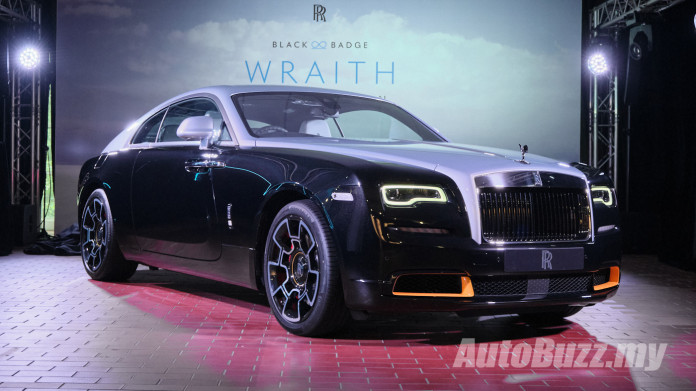 The Wraith is perhaps one of the most unique offering in the Rolls-Royce line-up, but unfortunately its production run is soon coming to an end, with order books for the two-door ultra-luxury coupe already closed. But by chance, the (probably) last-ever Rolls-Royce Wraith to make its way into Malaysia is a pretty special one – the limited-edition Wraith Landspeed Collection.

Back in the late 1930s, Rolls-Royce successfully set not one, but three land speed records, thanks to a certain “forgotten hero” named Captain George Eyston. So to commemorate their incredible achievements, the Landspeed Collection model is designed with several unique touches inspired by the record-breaking Thunderbolt machine, which was designed and driven by Eyston himself.

The Landspeed Collection only comes in one single two-tone colour combination (but available in two opposite variations), blending together Black Diamond Metallic and a new bespoke colour called Bonneville Blue. Colour matched to the skyline of the Bonneville Salt Flats in Utah, the latter changes colour from light blue to silver under direct sunlight.

The photo-electric timing equipment used during the record-breaking runs were not able to detect the Thunderbolt’s unpainted, shiny silver exterior. To combat this, Eyston painted a large black arrow with a yellow circle on the side to improve the Thunderbolt’s visibility – and the same yellow is also now littered throughout the entire car, both inside and out.

The main highlights of the Rolls-Royce Wraith Landspeed Collection, however, are actually on the inside – with the most obvious one being the new unique Starlight Headliner – a picture-perfect recreation of the night sky at the Bonneville Salt Flats on the 16th of September 1938, the day Eyston set his third and final record.

Rolls-Royce says that the constellations are precisely marked using 2,117 individually-placed fibre optic ‘stars’, the most they’ve ever fitted into the headliner of a Wraith!

Instead of some fancy veneer, the Wraith Landspeed Collection gets unique panelling on the dashboard and rear centre console, with the Salt Flat’s craggy surfaces etched on top. There’s also a commemorative plate on the front centre console that marks out the dates and speeds of the Thunderbolt’s three record runs.

The yellow circle and arrow livery is also immortalised on the clock on the dashboard, with “357.497 mph” and “Bonneville” engraved into the housing to commemorate the top speed recorded on the third and final run of the Thunderbolt.

But for us, the most significant piece of memorabilia is actually a single perforated line that runs across the entire driver’s side, starting from the top of the steering wheel, and through the seat upholstery to the back.

Due to the vast nothingness of the Bonneville Salt Flats, it’s almost impossible to see where you’re actually going – especially when driving at such high speeds. Eyston’s solution? Paint a long, black line on the surface as a guide. The simple solution is now immortalised forever in the Landspeed Collection cars as a nod to Eyston’s ingenuity.

On the inside of the driver’s door, you’ll also find a tricolour ribbon to commemorate the three significant honours George Eyston received in his lifetime – two from the British Empire, and one from the French. The ribbon is even made from the same Grosgrain weave silk as the original medals!

Last but not least, the armrests within the cabin – both on the centre console and by the door – are also upholstered in unique padding and thread work to mimic the club armchair that Eyston had in his Thunderbolt.

The rest of the car is based off the Rolls-Royce Wraith Black Badge, which means it shares the same powertrain underneath the long bonnet – a 6.6-litre twin-turbo V12 mill, sending 632 hp and 870 Nm of torque to the rear wheels via an eight-speed automatic gearbox. Despite its humongous size and weight – at over 2.4 tonnes – the Wraith Landspeed Collection still manages a century sprint time of just 4.5 seconds, onward to a electronically limited top speed of 250 km/h.

The limited-edition Wraith also shares the same blacked-out front grille and Spirit of Ecstasy figurine, as well as the red callipers from the Black Badge variants.

Only 35 units of the Rolls-Royce Wraith Landspeed Collection will ever be made worldwide, and as usual, they’ve all already been spoken for even before the car was launched publicly. This particular unit will be the only one in Malaysia, and what a sight it is. Check out more photos in the full gallery below!