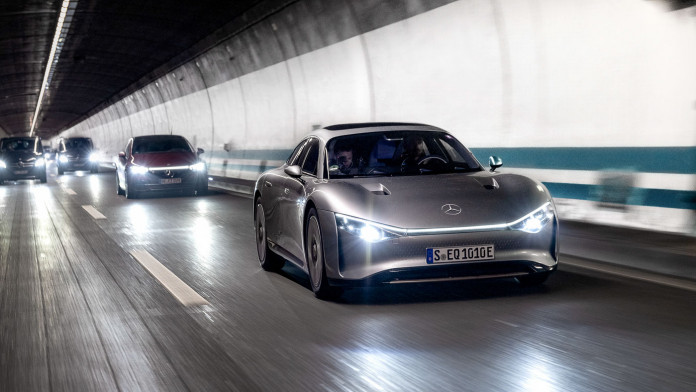 Even for a concept car, the Mercedes-Benz Vision EQXX looks weird, almost like a single-seater Le Mans racer and solar eco-car rolled into one. But it’s weird for a reason, and the reason is aerodynamics – Mercedes-Benz claims that the Vision EQXX can be driven for more than 1,000 km in just a single charge, and they’ve now proven it with a real-world driving test.

The test took place on a road trip across multiple European countries starting from Sindelfingen in Germany, travelling all the way down south in real-world traffic to the port town of Cassis along the Côte d’Azur – and yes, that means crossing the mountainous Swiss Alps too.

Mercedes-Benz says that the road trip was carried out in chilly and rainy weather, with temperatures ranging from 3-18 degrees Celsius. They’ve also not closed any roads specifically for the test, so the car had to travel at regular road speeds in both traffic jams and prolonged fast-lane cruising at up to 140 km/h on the German autobahn, not to mention the treacherous (for EVs) hill climb route – all of which are known to be battery range killers.

So how did the EQXX fare? According to independently-verified data, the fastback-sedan-thing-car completed the “over 1,000 km” journey with 15% battery charge to spare, which amounts to a remaining range of around 140 km. Average consumption was also measured at a record-breaking low of just 8.7 kWh per 100 km!

When the Vision EQXX concept car was first unveiled earlier this year, Mercedes-Benz claims that the 1,000 km range is “completely realistic”, due to the many technical design choices including its weird shape that gave it a drag coefficient of just 0.17 Cd – for context, the company’s own EQS, claimed to be the “world’s most aerodynamic production car”, only manages a 0.20 Cd.

The EQXX’s tyres have also been specifically made in partnership with Bridgestone to reduce rolling resistance, while the entire vehicle weighs just 1,750 kg (or about 900 kg lighter than the Mercedes-Benz EQS and Porsche Taycan), making it more energy-efficient up on uphill climbs.

The real-world test has certainly proven the claim without a shadow of a doubt. We’d even argue that they’ve bested the claim by quite some margin, as the usual WLTP range quoted by carmakers are all measured in ideal circumstances, and not real-world traffic; don’t be surprised when your EV’s actual real-world range is some 20% lower than what’s claimed on paper.

Mercedes-Benz says that many of these technological advancements will be integrated into future production vehicles, and we can’t wait to see what the future holds.