Mazda announced earlier this year its plans to introduce a whole swathe of new SUVs over the next few years, and the first one of the bunch has just been unveiled. It’s called the CX-50, and Mazda says it’s positioned to slot in between the CX-30 and CX-5.

And well, it certainly does look that way – with a body roughly the size and proportions of the CX-5, complemented by design elements from the smaller CX-30 such as the chunky plastic fender claddings.

Other new design touches include a gloss black wraparound trim around the front grille that even surrounds the new headlights, and to fit its off-road credentials, the CX-50 also gets significantly flared wheel arches and massive rear haunches, and even sporty matte black decals on the bonnet – for the launch car at least.

Mazda also noted that the rear doors on the new CX-50 were given particularly wide openings to make it easier to step on the door sills for access to the roof rack.

Inside, the Mazda CX-50’s cabin is fairly reminiscent of other Mazda models with a minimal and classy dashboard. Although, there’s the unique vertical air vents around the instrument cluster for perhaps a touch of added ruggedness.

Mazda is still keeping most of the CX-50’s mechanical details under wraps. But at launch, the new compact SUV will be offered with a couple of familiar engines from the Japanese carmaker’s stable, including the naturally-aspirated SkyActiv-G 2.5-litre petrol and SkyActiv-G 2.5T turbocharged variant that can both be found on the current CX-5. A hybrid variant will be introduced at a later date.

Based on the CX-5’s specification sheet, the naturally-aspirated mill will be good for 192 hp and 257 Nm, while the turbocharged unit brings it up to 228 hp and 420 Nm. Both engines will be mated to a six-speed automatic gearbox as usual, but uniquely on the CX-50, all-wheel-drive will be standard on all models to make this the stand-out off-road capable option compared to other Mazda models.

Befitting to its off-road nature, there’s also a drive mode selector with an Off-Road Mode in addition to just Normal and Sport, which perks up the G-Vectoring system and locks the differentials of the all-wheel drive system to make traversing rougher terrains that much easier.

The all-new Mazda CX-50 will be the first vehicle to be manufactured at the new joint Mazda and Toyota factory in Alabama, US. It’s slated to go on sale next Spring, but unfortunately will most likely remain as a US-exclusive for the foreseeable future. 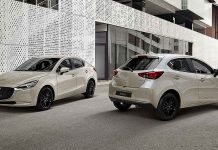 Updated 2022 Mazda 2 available in Thailand, gets powered seat with memory! The 2022 Mazda 2 Hybrid for Europe is a rebadged TNGA Toyota Yaris!