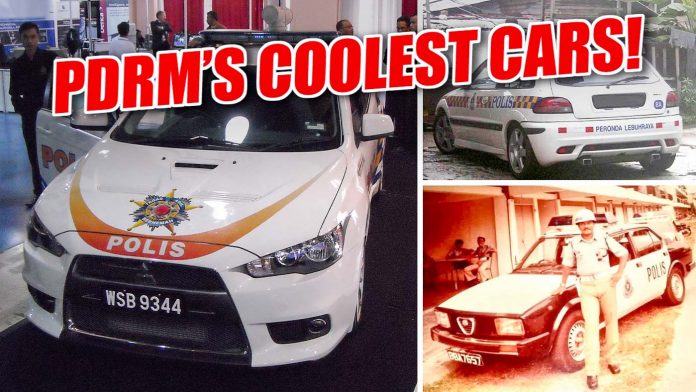 We’re sure you’ve already seen the new police-liveried BMW M3 that took the internet by storm. The Royal Malaysian Police (PDRM)… with a proper performance car! This can’t be true, can it?

Well, as it turns out, the BMW M3, alongside two X3s and two Volkswagen Tiguans, are being provided as technical evaluation units to the Malaysian police, for a duration of two weeks. So unfortunately, it’s not quite officially part of PDRM’s fleet – or at least, not yet.

With that being said, though, the Malaysian police did have some pretty interesting cars in its stable throughout its history. So while we wait for the PDRM’s decision on the M3, let’s have a look at some of the coolest Malaysian police cars in the past!

Although Alfa Romeo is no longer being officially represented here in Malaysia, the Italian carmaker did make quite a significant headway here in our country, with not one, but two models (the other being the Giulia 1.6) being used by the PDRM back in the 70s.

So what makes this car cool? First of all, it’s an Alfa, so it’s already cool by name. But more importantly, the Alfetta also featured a 2.0-litre inline-four engine underneath its bonnet, pushing out 130 hp and 178 Nm to the rear wheels.

Those numbers may not sound like much now, but it was quite an impressive figure back in the 70s. Keep in mind, the best-selling car at that time, the Datsun Sunny (120Y), only made about 70 hp – so it’s safe to say that most baddies won’t be able to outrun the Alfa Romeo when it comes to high-speed chases.

The Proton Satria GTi was, or perhaps still is, the most performance-oriented model to ever roll out from the assembly line of our local carmaker. Many Malaysian car enthusiasts dreamt about owning one, but did you know that the police actually had a couple of these little gems in their fleet?

The Proton Satria GTi is used as part of the PDRM’s highway patrol car, specifically to be used on the North-South Expressway. However, unlike the Alfa Romeo above, the reason the police chose the GTI isn’t due to its raw performance figures.

Powering the Satria GTi is a Mitsubishi-sourced 1.8-litre naturally-aspirated inline-four engine, generating 138 hp and 164 Nm of torque to drive the front wheels. The 0-100 km/h time of 8.5 seconds is pretty… alright to be fair, but the GTI’s main selling point is its “Handling by Lotus” badge on its bootlid.

Fun fact: the handling prowess of the Satria GTI was so good, that – in addition to the praises from the one and only Richard Hammond – it’s also trusted by the UK Police in Humberside as a pursuit and rapid response car! Oh, what I’d give for Proton to make a proper successor to the beloved Satria GTi today…

You must be wondering why this made the list of the coolest police cars in Malaysia, but the Volvo S80 is interesting precisely because of how… normal it looks.

From the outside, the Volvo S80 just looks like any other regular D-segment executive sedan – that is, if you can ignore the police livery on it. But underneath the plain Jane outfit is a 2.5-litre turbocharged inline-five engine that makes a pretty impressive 200 hp and 300 Nm of torque.

Sure, its heavier weight does mean a less-than-ideal century sprint time of 8 seconds flat. But with that much power, cruising at high speeds on the highway will be a piece of cake for the Volvo S80 – perfect for its specific use case in the police fleet.

Last but definitely not least in this list, is the Mitsubishi Lancer Evolution X – perhaps the most “well-known” Malaysian police car. Called the Helang Lebuhraya Polis (Police Highway Eagles), the Evo Xs are used primarily for highway patrolling and other high-speed chases, particularly in cases of carjacking, kidnapping and highjacking.

Underneath the bonnet is a 2.0-litre inline-four turbocharged engine that’s good for 295 hp and 366 Nm of torque, making it the most powerful police car the PDRM has ever had. Power is transferred to all four wheels via a five-speed manual transmission on the police car, as opposed to the six-speed twin-clutch on the car that was sold by Mitsubishi Motors Malaysia.

Sure, it’s not the Lamborghinis or Ferraris that some other countries’ cops have, but with the clout and heritage surrounding the car, plus the JDM fandom among many Malaysian car enthusiasts, we dare say that the Evo X might actually be more desirable than the other police supercars – and definitely something for us Malaysians to be proud of!

Man, the 60s really was a great era, wasn’t it? Even an every-day run-off-the-mill station wagon can look so cool.