Remember the Microlino 2.0? One and a half years since the concept first made its debut, Micro has now finally launched the ultra-compact two-seater at the 2021 IAA Motor Show in Munich in its final production form – and it’s still just as adorable as ever.

In case you needed a recap, the Microlino 2.0 is a compact mobility microcar, with the design heavily inspired by the Iso/BMW Isetta from the 1950s. And while it now has four wheels instead of three, the spirit of the Isetta still very much lives on with the Microlino 2.0.

The Microlino 2.0 will come in three trim levels – Urban, Dolce, and Competizione – and will be available with three battery capacities: 6 kWh, 10.5 kWh, and 14 kWh. Customers can freely pair their desired trim level to any battery capacity they wish.

No matter which battery/trim configuration you choose, though, the Microlino bubble car will feature the same electric powertrain underneath – a single motor on the rear axle producing 19 kW (26 hp) and 118 Nm of torque peak, or 12.5 kW (17 hp) sustained.

Due to its ultra light weight (weighing just 435 kg without batteries), the low power output still results in a pretty respectable acceleration, taking about five seconds from a standstill to 50 km/h, onward to a top speed of 90 km/h – you wouldn’t want to go any faster in a tiny car like this, anyway.

In terms of design, the production-ready Microlino 2.0 is basically unchanged from the concept we saw last year – obviously with the bubble car shape being the main highlight. The LED headlights are embedded into the wing mirrors, and the single fridge-like door is opened via a small button located below the headlight.

Inside, the cabin of the Microlino 2.0 is also largely unchanged, except for the addition of a second screen on the door-mounted dashboard (although technically right, it still feels wrong to saay), which replaces the bank of buttons from the concept.

The second screen control auxilary functions such as heating, and according to Micro, gives more flexibility to add additional features while using less space.

As for the trim levels, the entry-level Urban version is available in Santorini White or Amsterdam Orange, paired to a glossy black roof. Inside, the seats will be upholstered in fabric, in either black or anthracite shades.

Moving up to the mid-range Dolce adds additional chrome details on the exterior, plus the pretty Infinity LED light bars at the front and back to compliment the headlights and tail lights. Paris Mint, Milano Red, and Zurich Blue shades are also added into the colour palette, but this time paired to a white roof instead.

As for the flagship Competizione variant pictured here, you get an addition of three matte body colours – Gotham Anthracite, London Green, and Torino Aluminium – contrasting the glossy black roof.

Both the Dolce and Competizione variants will also get a folding sunroof as standard (optional in the Urban), alongside a choice of fabric or vegan leather upholstery.

The Microlino will start at EUR12,500 (approx. RM61.5k) for the Urban variant, staying true to the previously advertised price despite higher development and production costs. Assembly will begin this year at the company’s own facilities in Turin, with an initial annual capacity of around 7,500 units.

Micro has already received more than 24,000 reservations for the Microlino 2.0, with first deliveries expected to start at Switzerland first, followed by Germany, and the rest of Europe later on. 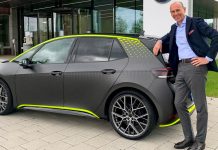