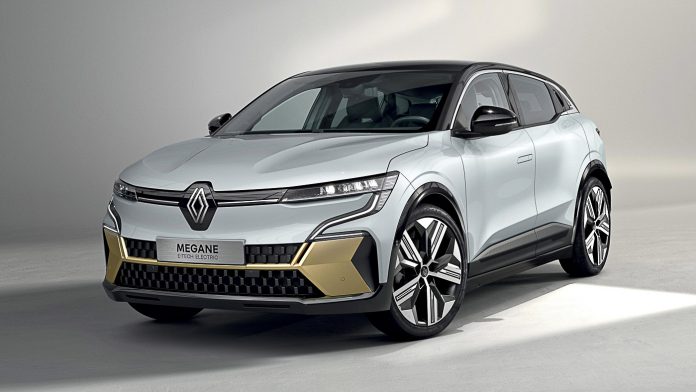 The Renault Megane E-Tech Electric has been unveiled at the ongoing 2021 IAA Munich Motor Show, one of the very few production vehicle launches unlike the many concept vehicles and even a racing car.

While the Megane model has always been a C-segment hatchback, Renault first placed the Megane nameplate on a concept EV model called Megane eVision just about a year ago. Much of the styling elements have been retained in the production vehicle, the name simply called Megane E-Tech Electric.

The Renault Megane E-Tech Electric is the first model to sport the company’s latest diamond logo called ‘Nouvel’R’, bringing the brand to a new era of EVs, connected cars and mobility. At the front, the DRLs appear to extend beyond the projectors and continue their path up to the side air vents on the shield. At the rear, numerous laser-cut micro-optic fibres laid in criss-crossing lines create an intriguing 3D-like shimmer effect.

In addition to the elegant indicators, the brake lights are displayed in two clear lines, much like a ‘pause’ sign.

Similar to many upcoming EVs, the door handles are flush with the body, but the rear door handles are mounted high up at the C-pillar. For added personality and to convey a message of electric, the front and rear bumpers have gold highlights, an element that was well received in the Megane eVision concept car.

Built on the new CMF-EV platform that is shared with Nissan, the Renault Megane E-Tech Electric is said to offer interior space that is similar to the current generation Megane hatchback. A long wheelbase of 2.7 metres and repackaging of the air-conditioning hardware allows for a spacious cabin and a rethink of the dashboard layout.

Both the 12.3-inch driver’s instrument cluster and the infotainment system are powered by the latest Android Automotive OS that includes familiar apps and services like Google Assistant, Google Maps and Google Play. Plenty of customisation on the screen as well as over the air updates are designed as highlights of the system.

Buyers will also have the option to choose the battery capacity with the larger 60 kWh offering a driving range of 470 km, while the smaller 40 kWh model offers up to 300 km.

Renault to use Geely hybrid tech for China and Korean markets. Find out which brand under Geely is set to benefit here!

In both capacities, the battery’s dimensions remain unchanged, including the record height of 110 mm (1,960 mm length and 1,450mm width). They come with an 8-year guarantee, during which they will be replaced free of charge should they deteriorate to less than 70% of their nominal capacity.

LG together with Renault are using a new lithium-ion NMC (Nickel, Manganese, Cobalt) battery chemistry technology to achieve the compact dimension that is 40% smaller than the battery in the Renault Zoe. The efficient battery pack also benefit from a new liquid cooling system that includes die-casted aluminium tubes.

Compared to Nissan, Renault’s alliance partner, the Nissan Ariya has better range and power due to even larger battery sizes and dual electric motors for a new all-wheel drive system called e-4ORCE.

Alpine to take over as Renault’s performance brand with full EV line-up from its next generation of vehicles. More about the bold plan here.

New advanced driving assistance systems (ADAS) in the Renault Megane E-Tech Electric include the Active Driver Assist, where it can slow the vehicle down to 29 km/h when nearing a roundabout and then accelerate back up to speed when exiting.

Other safety features include a digital smart rearview mirror that feeds live rearward image for an unobstructed view of the rear, occupant safe exit and rear AEB that is very useful to avoid contact while parking.

The new Renault Megane E-Tech Electric is the first model to be 100% ‘Made in Electricity’, the company’s new industrial hub and European leader of EVs located in the North of France.