Home News Radford shows how to do a retro tribute right with the 600... Remember Radford, the historic British coachbuilding firm that was recently revived by F1 World Champion Jenson Button? In case you missed their earlier announcement, Radford has partnered with Lotus for their first project to build a modern-day 1969 Lotus Type 62/2 prototype race car – and the result, shown-off over the weekend, has got us all hot and bothered. Hoo-boy.

Just by looking at the photos, you can already see the parallels between the Radford and the original Lotus Type 62/2 race car, from its silhouette down to classic F1-inspired liveries.

But what you can’t see, are all the modern-day mechanical components underneath it, including the same bonded aluminium chassis as the other Lotus cars, carbon fibre composite construction of the body, and the same supercharged 3.5-litre Toyota V6 that’s been in Lotus cars for more than a decade.

The Lotus Exige and Elise have been discontinued – now replaced by the all-new Emira. Check it out here!

The Radford Type 62/2 will be offered in three variants, cheekily called the “Classic”, “Gold Leaf”, and “JPS” (for John Player Special), inspired by the most successful Lotus race cars – and their liveries – of days past.

Starting with the Classic, the 3.5-litre supercharged V6 mill behind the driver already makes 430 hp out of the gate – pretty much the top-end of the Lotus Exige and Elise range. The Gold Leaf takes it up a notch to 500 hp thanks to upgraded pistons and camshafts, while the JPS, with a new supercharger and upgraded software tuning, takes the total up to 600 hp.

If you want to fully commit to the old-school experience, though, the Classic will be your only option, as it’s the only one that comes with a manual transmission. Other variants are equipped exclusively with a seven-speed DCT gearbox, alongside an an electronic limited-slip differential.

The Classic and Gold Leaf Radford Type 62/2s also get four-piston AP Racing brakes, while the JPS gets upgraded carbon-ceramic stoppers for better stopping performance to go alongside its significantly uprated engine.

If you’re still looking for an Elise or Exige, here’s your last chance – the Final Edition models are now available in Malaysia. More info here!

Other mechanical upgrades are in its chassis, which Radford’s own bespoke subframe is said to help improve stiffness and agility, while keeping the weight down. All-in, the Radford Type 62/2 measures in at just 1,000 kg, which means it’ll have a power-to-weight ratio comparable to other modern day supercars.

All three Type 62s will use four-way adjustable coilovers with an optional nose lift as well, which the company notes that Jenson Button personally calibrated the car to achieve “exceptional steering feel and driver feedback.”

That’s all mightily impressive, but let’s be honest, people buying this car are really only doing it for the looks; those looking for a pure Lotus driving experience can just buy an actual Lotus, for (presumably) a lot less money.

Stylistically, the Classic is the most subtle of the bunch, without the unique rear wing and the historic liveries, and only wearing 17-inch wheels up front and 18-inchers on the rear.

The Gold Leaf and JPS meanwhile, as their name suggests, wears the respective classic Lotus race car liveries, and adds on a unique “double ducktail” spoiler at the rear to improve downforce specifically for track driving. Wheel sizes are up by one inch on both front and rear axles.

In similar fashion, the Kimera EVO37 is a bespoke creation made to honour the great Lancia 037 rally car. Check it out here!

No images have been shared for the inside, but Radford says that the modern-day Type 62/2 is designed to be a “true driver’s car with the luxury appointments of a bespoke coachbuilder”. Just like a modern car, there’ll be a six-inch digital instrument cluster behind the steering wheel, and an infotainment display with most modern connectivity features built in.

Taking the “modern touches” one step further, are the “wing mirror” cameras on both sides of the car in place of actual mirrors, with the image being displayed on the A pillars. Even the rear-view mirror is a camera as well – but this one is pretty much out of necessity, as the rear panel is a solid piece covering the engine underneath it.

Radford hasn’t shared how much this slice of perfection will cost, but seeing that it’s limited to just 62 units worldwide, plus all the bespoke work that’s gone into it (not to mention the celebrity status of its founders…), it’ll probably be pricier than you think.

Production of the Radford Type 62/2 will start at the company’s facility in California beginning later this year, with first units expected to be delivered early 2022. It’s the end for the Elise, Exige, and Evora – final units roll off production line 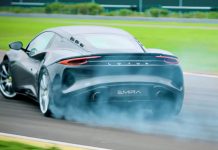