McLaren Special Operations (MSO) today unveiled the McLaren ‘Albert’ Speedtail, a custom commission by McLaren Beverly Hills in the US.

‘Albert’ is one of the final vehicles in the 106-unit production of the McLaren Speedtail and is a tribute to the Speedtail development car that first came to life in 2018.

It also pays tribute to the McLaren F1 prototypes from 1992, which were also named Albert. The name came from the facility in Woking, England, situated along Albert Drive, where the McLaren F1 was designed and built.

Find out more about the McLaren Speedtail here…only 106 units produced!

Originally built with the front panels of the 720S, the ‘Albert’ prototype was the first Speedtail to be driven on public roads. On a side note, the 720S is available in Malaysia from RM1.2 million before duties.

The lines on the Magnesium Silver and Ueno Grey body was achieved with two-metre vinyl body wrap with design lines printed to represent the optimised airflow over the car. The body itself is made of 1K gloss visual carbon fibre.

Magnesium Silver was also the colour of the first McLaren F1 road car shown to the public at the 1992 Monaco Grand Prix. Ueno Grey on the other hand was the colour of the F1 GTR that won the 24 Hours of Le Mans in 1995.

In total, Albert required a 12-week post-build modification at MSO’s facility. This included two week’s of masking, six week’s of painting. The remaining time was used to dry and reassemble the vehicle after spraying.

In total, the masking of the livery required almost two kilometres of fine tape to complete the initial design layout. 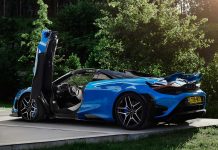