The Porsche Macan was the company’s best-selling model until the Cayenne overtook it last year. With the all-new and fully-electric Macan only due in 2023, Porsche has updated the Macan with new styling features and a power bump.

The new Porsche Macan features new front and rear bumpers plus the characteristic Sideblades. For the Macan S and Macan models, the new front bumper features a body-coloured inlay to emphasise the model’s width. On the GTS, the centre of the new bumper as well as other elements are finished in black.

The rear bumper gets a distinctive looking rear bumper with a pronounced shape like an extension of a diffuser. New 3D patterns on the bumpers and sideblades are also available as an option for further personalise the new Macan.

The LED headlamps with Porsche Dynamic Light System (PDLS) and Sport Design exterior mirrors are now standard on all variants.

Is this a Porsche showroom or a high-end fashion boutique? New Porsche Studio opens in Vietnam

Compared to the previous model-year, all variants of Porsche Macan all see an increase in power output. The 2-litre four-cylinder unit in the base Macan now delivers 265 hp and 400 Nm, launching the vehicle from 0 to 100 km/h in just 6.2 seconds.

Meanwhile, the 2.9-litre V6 biturbo engine with outputs of 380 hp and 520 Nm previously serving duties in the sporty GTS variant has now been moved to the Macan S variant. As such, the new Porsche Macan S does the century sprint in just 4.6 seconds with the Sport Chrono Package.

With that powertrain repositioning, the new Porsche Macan GTS gets the 440 hp/550 Nm higher-tuned V6 biturbo engine from the outgoing Macan Turbo. It maintains the same 4.3-second sprint time too. The top speed for the new Macan GTS is a blistering 272 km/h.

Porsche says the new Macan GTS sits at the top of the range, sounding as if the Macan Turbo has been discontinued from this model-year improvement onwards. Being the range-topper with plenty of sporty credentials, the new Macan GTS with sports air suspension fitted as standard.

The fastest SUV around the Nurburgring is now available for sale, the Porsche Cayenne Turbo GT with 640 hp!

Apart from lowering the overall height by 10 mm, the air suspension is also 10% and 15% stiffer on the front and rear axles respectively compared to its predecessor model. The regular Porsche Active Suspension Management (PASM) has been retuned for more sensitivity and more feedback to the driver.

Inside, a new centre and lower console with touch surface (replacing all physical push buttons) and a new shorter shift lever greet the occupants, while the driver feels even more connected to the road with new steering wheels from the latest 911 model. 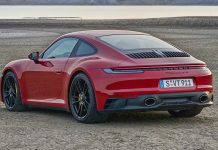