Home News Audi’s idea of an EV charging station is, of course, a first-class... 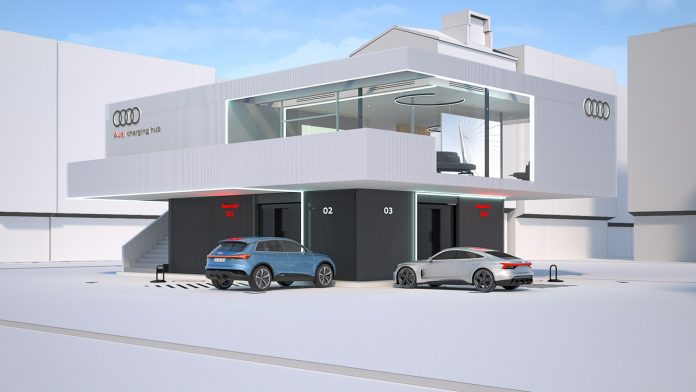 As the entire automotive industry shift towards electrification, the need for proper charging infrastructures is also rapidly increasing. As a result, many carmakers themselves have jumped in to provide their own service, in order to sway customers into their camp.

Tesla has their Supercharger network, Volkswagen has the ID charger; heck, even traditional combustion fuel companies like Shell also want a piece of the pie. Audi, not wanting to be left behind, is also coming up with their own stations – and with them being a luxury carmaker, their charging station concept is quite predictably, a luxury affair.

The photos you’re looking at here depict Audi’s concept of a high-class charging hub, replete with a lounge not unlike those that you’ll see at airports for first-class passengers. While you wait for your EV to charge, the lounge lets you pass time while enjoying a range of snacks, drinks and other “non-food items”.

The six chargers at the hub – which you can reserve before arriving – will be capable of delivering up to 300 kW, which means it’ll be able to charge the Audi e-tron GT (which maxes out at 270 kW) from 5-80% in roughly 23 minutes – perfect time for a coffee and some snacks.

Audi intends to power these station with what it calls “cubes”, which are basically old batteries disassembled from used EVs. Not only does it make the whole EV life cycle more sustainable, but also makes it significantly easier – both logistically and monetarily – to deploy these stations at more places, as there’s no need for complex infrastructures such as high-voltage lines and expensive transformers.

In total, a single charging station will be capable of storing 2.45 MWh of energy, and only requires a standard 400V power source. The cubes can be charged overnight, while solar panels on the roof supplement it with additional green energy during the day.

Audi says that a pilot project will commence in the second half of the year somewhere in Germany, with talks with potential partners currently underway. The findings about day-to-day operations and customer acceptance from this pilot project will then decide if the company will further implement the concept.

While the building is clearly Audi branded, the carmaker says that owners of other EVs can also use the pilot station to charge up their cars – although, you won’t be able to make prior reservations, so it’s up to luck if any of the six bays are taken when you arrive. Also, you’d only have access to “parts of the lounge”, so you want the full first-class experience, perhaps it’s time to splash some cash on those four rings.