We know that everyone wants an SUV. But with everyone and their aunts releasing a performance-oriented SUV, it seems like the demand for fast SUVs are equally as high. The latest company to join the bandwagon is Hyundai with the all-new Kona N, and it makes zero sense no matter how you look at it – which is a good thing, probably.

Powering Hyundai’s “first true hot SUV” (their words, not ours) is a 2.0-litre turbocharged four-cylinder, plucked out of the Veloster N, that sends 280 hp and 392 Nm of torque to the front wheels, translating to a 0-100km/h time of 5.5 seconds (with launch control) and a top speed of 240 km/h.

While yes, the massive numbers are definitely the main headlines here, the Kona N is so much more than just brute force. For example, the eight-speed DCT gearbox itself – no manual option here unfortunately – which was tested around the Nordschleife for as much as 1,350 laps, already comes with three separate higher performance modes.

These include the “N Grin Shift”, which instantly shifts down to the “most appropriate gear” alongside a 20-second 6 hp boost; “N Power Shift” which automatically engages when the accelerator pedal is pushed over 90%, mitigating torque loss during gearshifts and more importantly makes the customary loud bang sounds; and a “N Track Sense Shift” which optimises the transmission for – as the name suggests – track driving.

And it’s not just the gearbox that was honed in on the ‘Ring – the Hyundai Kona N also comes with a reinforced chassis and a model-specific suspension set-up that was tuned on the Green Hell.

That’s all sounds mightily impressive – and even more so on a tall-riding crossover (which Hyundai insists that it feels like a hot hatch underneath). But what’s the point of going fast if it doesn’t look at least just as fast, right?

For that, the new “hot SUV” builds on top of the N Line (that we’re getting here soon!) in terms of looks with a unique grille mesh pattern, and new front lip and side skirts – the latter two with striking red accents.

Bigger changes are at the back, as the Kona N adds on a racecar-inspired triangular third brake light, a functional double-decker roof-mounted spoiler, enormous dual exhaust outlets, and the customary N badging.

The new hot hatch SUV debuts with a new N-exclusive “Sonic Blue” exterior colour, which Hyundai says is a new spin on the iconic Performance Blue colour. While it’s the only model with the new hue right now, Hyundai says that it “previews a possible SUV line-up expansion”, hinting at a new N performance SUV in the future – Tucson N, maybe?

Inside, the Hyundai Kona N gets an N-specific sport steering wheel with steering-mounted N buttons to go with its new sporty credentials, alongside alloy pedals, and N-branded microfibre suede sports seats. As is standard on all N performance models, designers also added a liberal splash of Performance Blue accents throughout.

But more importantly (according to Hyundai, anyway) is the new dual 10-inch infotainment + digital cluster system and an exclusive “racing head-up display”, which comes with an ‘N mode design’ displaying lap times and your on-track location on the pre-installed track maps to deliver a “game-like” driving experience.

While it’s clearly designed for the track, Hyundai wants you to believe that the Kona N can still handle day-to-day driving sufficiently. The SafetySense ADAS suite is retained on the performance SUV, with features such as autonomous emergency braking, lane-keeping assist, and Smart Cruise Control coming as standard.

All of the conveniences you get from a crossover – including the taller (-ish) right height and extra boot space – are all also still present here. But really, with a Nürburgring-tuned suspension, you’re really going to be better off just keeping it on the racetracks. The Hyundai Santa Cruz is the pick-up truck version of the Tucson and it looks great! 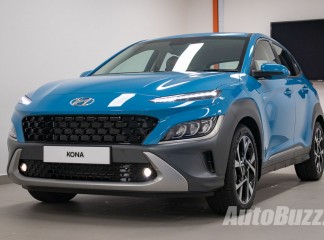