Volkswagen has just unveiled the new Polo facelift today, four years after the sixth-generation model was first introduced back in 2017. And for what is only a mid-cycle update, the new Volkswagen Polo has received quite a significant amount of changes especially to its exterior, making it even more painful for us to just watch from the sidelines as the only VW Polo available on our shores – for now at least – is the older Mk5 model.

Up front, the new Volkswagen Polo is now equipped with fully-LED headlights across the board. The design itself is also now a lot cleaner, ditching the old crooked daytime-running light for a new double-J light signature which extends all the way across the bottom of the upper grille – only separated by the new VW logo.

For higher-end variants, the Polo is also offered – for the first time on the model – with the IQ.Light matrix LED lighting system. Budget no more, it seems.

However, the most significant change to the exterior of the new Volkswagen Polo facelift is actually at the rear, where it now gets a wider, horizontally-oriented tail light assembly, with a design that’s clearly inspired from its elder brother, the eight-generation Golf. Also inspired by the other new VW models is the new ‘Polo’ script underneath the central Volkswagen badge.

The blue car in these photos is also equipped with the R-Line design package, which tacks on additional gloss-black accents and ‘R’ badges all around, a larger roof-mounted spoiler, a different mesh pattern on the front grille, larger wheels, and a set of fake exhaust tips at the rear – something we’d rather do without, but there’s probably a reason why almost every carmaker is doing it.

Moving inside, the new Polo now gets a digital instrument cluster across the board, measuring either 8.0- or 10.25-inches depending on variant. A touchscreen infotainment display is also standard, ranging from 6.5-inches to 9.2 inches in the higher-spec models.

Also new is the capacitive touch-panel for the dual-zone automatic climate control, borrowed from higher-end models in the VW stable, while the colour-matched dashboard trims are replaced by a more boring… I mean “grown-up” (sorry, I drive a Beetle) brushed aluminium-looking item.

On the safety front, the new Volkswagen Polo can now be optioned with a Level 2 autonomous driving system, dubbed the IQ.Drive Travel Assist package. Lane keep assist is standard across the board, alongside autonomous emergency braking.

The new Volkswagen Polo will be offered with three petrol powertrain options, all featuring a 1.0-litre engine. At the lowest end is a naturally-aspirated variant, offering up a puny 80 hp and 93 Nm, with power sent to the front wheels via a five-speed manual transmission.

Next-up is the 1.0 TSI engine, in either a 95 hp or 110 hp tune. A seven-speed DSG dual-clutch gearbox is optional for the lower powered variant, and standard for the 110 hp version.

There’ll also be a new Polo GTI headlining the supermini line-up in the near future, which will most definitely feature a larger engine… We think – no further information have been divulged just yet. 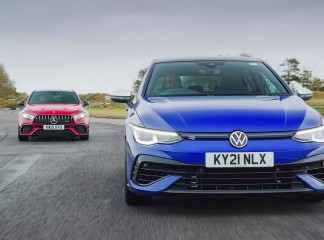