Home News The SUV e:Prototype might be our first look at Honda’s first EV... 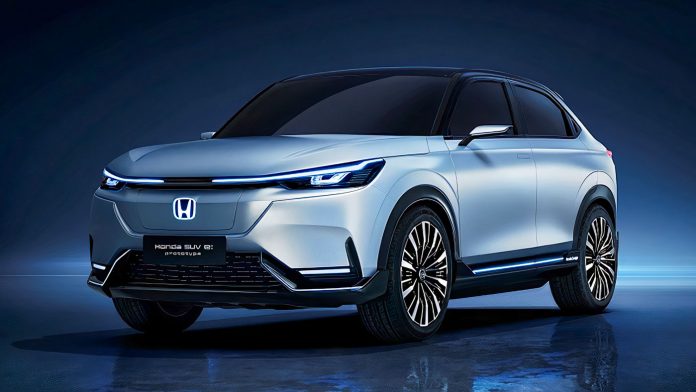 Honda has just shown off a new prototype vehicle, called the SUV e:Prototype at the Auto Shanghai 2021 motor show – and as the refreshingly articulate name suggests, this will be the Japanese carmaker’s upcoming fully-electric SUV, set to go on sale in China mid-2022.

The new fully-electric SUV will spearhead Honda’s EV charge in China, where it aims to introduce 10 Honda-branded EV models in the country within five years, to realise its carbon-neutral goal by 2050.

Based on these photos provided by Honda, it seems like the upcoming SUV EV will be based on the all-new HR-V, which was just recently unveiled in February of this year.

Seeing how closely the all-new Honda Civic resembled the first public “prototype”, we’re convinced that this is pretty much how the actual car will look like – save for some minor changes (such as bigger functional wing mirrors) to satisfy local safety regulations.

This being an electric-only model, there are of course several EV-friendly modifications to the looks, most noticeably the new front grille – or lack thereof, replaced by what looks like a charging port cover with an illuminated Honda logo in the middle.

Bright lights seem to be Honda’s idea of a ‘future-ready’ EV design, as there are LED light bars almost everywhere on the prototype vehicle. The headlights are unique on the SUV e:Prototype, with a U-shaped light signature, paired to an extended eyebrow-style daytime running light that stretches inwards, almost across the entire front fascia.

Further down, the black bumpers are accented by thin LED light strips trims – not chrome, as one would presume at first glance. Air inlets bookend the bottom apron, accompanied by horizontal LED positioning lights.

The whole lighting motif is once again found on the sides of the SUV e:Prototype, with a thin LED light strip adorning the bottom trim element, and another on the slim wing mirrors. Otherwise, the sides are largely unchanged from the Honda HR-V, including the character line that extends from the front bonnet shut line all the way towards the tail lights at the rear.

More similarities can be found on the rear door handles, which are tucked in nicely into the C-pillars, though the e:Prototype comes equipped with “hidden” front door handles for aerodynamic purposes.

At the back, the full-width light bar tail light assembly from the HR-V is carried over onto the Honda SUV e:Prototype, though there seems to be a new light signature design here. There’s a new roof-mounted spoiler with an integrated sleek full-width third braking light, while further down on the bumpers, the LED positioning light strips mirrors that on the front fascia.

No photos have been shared on the upcoming electric SUV’s interior, but a short video on Honda China’s website shows a large portrait style central infotainment display, paired to a fully-digital instrument cluster behind the steering wheel. Obviously, these could just be computer renders, and might not reflect on the production-ready car.

The video also shows a facial-recognition system at work – Honda says that the upcoming fully-electric SUV will come with the third-generation Honda Connect system, which utilises artificial intelligence to power a host of connected services, alongside a new “omnidirectional ADAS” system, so we’re guessing that’s part of the sensor suite.

Similarly, no information has been shed on the electric powertrain underneath the bonnet, but Honda says that they are focusing on delivering “dynamic, yet smooth acceleration performance” on the upcoming fully-electric SUV, of which the driver can feel the “joy of driving in abundance” – we’ll see about that when the car is actually launched.