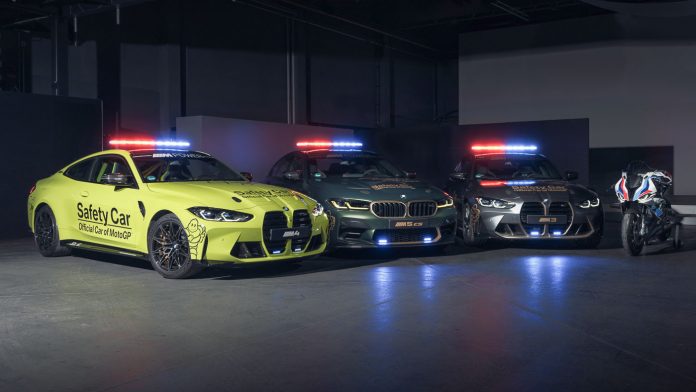 Since 1999 BMW’s M cars have been the Official Car of Motor GP and when the new season kicks off on the 28th of March at the Grand Prix Qatar, both riders and spectators will be greeted with a new line up of M cars.

With the new fleet of safety cars and bike for the 2021 Moto GP season, BMW M has foregone the classic motorsport colour scheme and instead opted for the exclusive colours offered to the production fleet.

That’s not all. These cars have been slightly modified to be equipped with light bars, flashing front lights, quick-release bonnet latches, and emergency power shut-off switches.

The rear seats in the BMW M4 Competition have been removed but for the front seats, 4-point harnesses have been installed. The M3 and M4 in particular come with modified exhaust systems.

“We are very proud to be starting the season with four new vehicles for the first time in our 20-year history as the ‘Official Car of MotoGP’. Our three new safety cars are based on production models, which deliver outstanding performance and driving dynamics that make them ideally suited to appear in the Moto GP,” said BMW M, CEO, Markus Flasch.