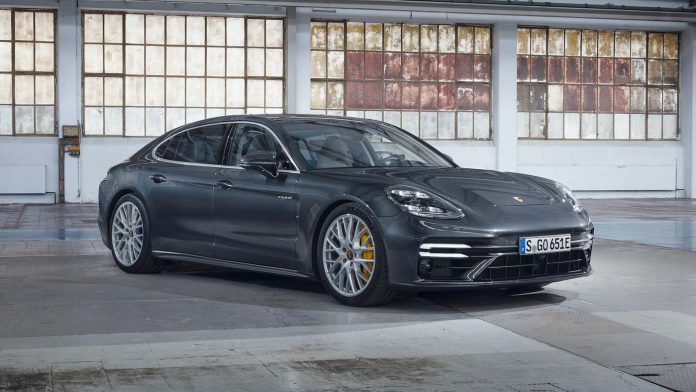 Shortly after unveiling the facelifted Panamera back in August, Porsche has now followed up with three new variants in the line-up, headlined by the model’s new flagship, the Panamera Turbo S E-Hybrid.

The new range-topping variant packs an improved 576 hp 4.0-litre twin-turbo V8 engine, paired to a 136 hp electric motor to generate a combined system output of 699 hp and 870 Nm – making it the most powerful Panamera variant, and second most powerful Porsche currently in existence.

Curiously though, thanks to its heavier weight, the Turbo S E-Hybrid’s 0-100 km/h time is actually slower than its non-electrified twin by 0.1 seconds, completing the sprint in 3.2 seconds – still 0.2 seconds faster than its predecessor. Top speed is now 315 km/h, 5 km/h faster than before.

Also introduced is the new 4 E-Hybrid variant, which is the brand’s new entry point to the electrified Panamera line-up. Underneath the hood is a twin-turbo V6 engine and an electric motor integrated into the eight-speed dual-clutch transmission, producing a combined output of 461 hp. The Panamera 4 E-Hybrid does 0-100 km/h in 4.4 seconds, onward to a top speed of 280 km/h.

The trio of electrified super sedans – including the Turbo E-Hybrid launched in August – all come with a new larger 17.9 kWh battery pack, which translates to an all-electric range of 50 km on the Turbo S E-Hybrid, and 56 km on the 4 E-Hybrid – all based on the WLTP EAER City test cycle.

Aside from the new plug-in hybrid variants, Porsche also rounded-up the Panamera line-up with the new Panamera 4S, powered by an uprated 2.9-litre twin-turbo V6 engine that develops 449 hp. Performance wise, the new Panamera 4S completes the century sprint in 4.1 seconds (0.1 seconds faster), and similarly the top speed has also been increased by 6 km/h to 295 km/h.

As for styling, the Panamera 4S is equipped with the Sport Design front end with a twin-line daytime-running lights design to differentiate itself from the electrified 4S E-Hybrid. The top-of-the-line Turbo S E-Hybrid meanwhile gets a “dual C-shaped” DRL set-up to exaggerate its larger side air intakes, as seen on the ICE-only Turbo S.