Ferrari has introduced the Omologata, a one-off client-commissioned unit that is based off the 812 Superfast. Finished in Rosso Magma, the Omologata pays tribute to the brand’s historic race cars while remaining uniquely one-of-a-kind.

Ferrari says that the entire process from initial sketch to completion took a little over two years to complete. Visually, it shares only its windshield and its headlights with the model it’s based on, aside from the inevitably-similar proportions.

The objective of the design was to exploit the proportions of the 812 Superfast’s mid-front layout to deliver a sleek design defined by smooth volumes and undulating reflections, with surface breaks only present wherever dictated by aerodynamic functions.

Ferrari says that the design team led by Flavio Manzoni, who also penned the award-winning Ferrari J50, carefully studied the and refined the “stance and attitude” of the car from all angles, which resulted in a very defined flat oval grille at the front.

The front wheel arches are emphasized by the contrasting stripe that goes across the bonnet. At the rear of the door, the flank develops into a muscular rear haunch that blends neatly upwards towards the three-quarter panel.

The rear of the Ferrari Omologata is also frightfully imposing, thanks to the single round taillights on each end set deeply into the body work, surmounted by a prominent spoiler which adds not only downforce but a more aggressive, sporty stance. The louvred rear “window” contributes further to the whole retro-inspired look.

Inside the Omologata, the electric blue seats are finished in a tasteful combination of leather and Jeans Aunde fabric and fitted with a four-point racing harnesses, which stands out against a full black interior.

However, the coolest detail inside is definitely the metal trims on the dashboard and steering wheel, finished with a crackled paint effect associated with the Ferrari’s GT racers of the 1950s and 1960s, along with a hammered paint effect on the door handles inspired by the 250 LM and 250 GTO.

No specifics have been revealed as to what is powering this one-of-a-kind Ferrari Omologata, though the Prancing Horse did say that it’s the 10th front-engined V12 one-off that has been delivered since the 2009 P540 Superfast Aperta, suggesting the use of the naturally-aspirated 6.5 litre engine from the 812 Superfast, which develops 800 hp and 718 Nm in stock configuration.

Commissioned by an unnamed Europe client, Ferrari of course did not divulge on the price for this one-off bespoke model. But seeing the extent that Ferrari designers have gone to recreate some of the most signature Ferrari design cues – all without falling into nostalgia – it’s not hard to guess that the number will probably be more than a couple of magnitudes higher than the number we can imagine. 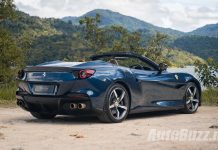 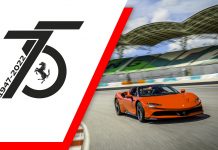 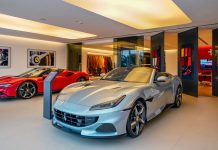