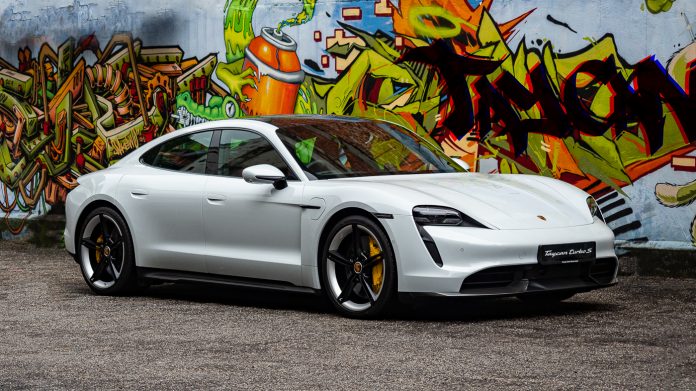 To put things in perspective, the base model Panamera retails at RM860k but with a whole lot less power. That’s cause the Taycan Turbo S and Taycan Turbo is powered by not one but two electric motors, one on the front axle and one on the rear axle, making the cars all-wheel drive.

The Turbo S serves up 412 km of driving range while the Turbo model musters more, up to 450 km. Top speed on both all-wheel drive models is 260 km/h.

Power is delivered through a 2-speed transmission fitted on the rear axle. The first gear gives the Taycan even more acceleration from a standing start, while second gear with a long gear ratio ensures high efficiency and equally high power reserves. This also applies while the Taycan is travelling at high speeds.

In just over five minutes, the battery can be recharged using direct current (DC) from the high-power charging network for a range of up to 100 kilometres.

The Taycan Turbo S comes with the Porsche Ceramic Composite Brakes as standard, along with carbon exterior trims such as the door sills, sideskirts and rear diffuser. These would be optional in the Taycan Turbo and Taycan 4S.

As the Taycan is fully electric without engines occupying the front, or back for that matter, there are two luggage compartments available. The front section offers 81 litres while the rear can gobble up 366 litres of cargo.

Inside, the curved digital instrument cluster and infotainment displays features a specific user interface designed specifically for the Taycan. The usual physical controls such as switches and buttons have been significantly reduced.

For the first time ever, Porsche is offering an entirely leather-free interior for the Taycan. Instead, the interior is made largely of innovative recycled materials.