Right after the launch of the BMW M5 and M5 Competition, Mercedes-AMG immediately hit back with its own big daddy E 63 4MATIC+ models, continuing the long-standing German rivalry.

On the exterior styling, Mercedes-AMG took the very pretty E-Class facelift, and turned the aggressive knob all the way up to 11. Up front, the big boy E 63 twins gets the full AMG jet wing treatment on the front bumper intakes, along with the AMG-specific Panamericana grille.

Over at the rear, the 63 twins get a more elaborate rear lip spoiler and bumper design compared to the AMG E 53 which, you guessed it, also helps with the overall aerodynamic performance of the car. The E 63 is shod in 19-inch 10-spoke light-alloy wheels, while the S model gets 20-inch five-spoke units – both of which are “aerodynamically optimised”.

Exclusively on the 63 models, the exterior trim pieces can be optioned in two levels of carbon fibre-ness. The AMG Exterior Carbon-Fibre Package I includes the front splitter, trim insert in the longitudinal member, and the rear apron trim element. Upgrade to the Package II, and you’ll get additional carbon fibre on the mirror caps, and the boot-lid spoiler on the sedan.

The V8 mill is paired to an AMG Speedshift MCT nine-speed automatic transmission, with power sent to all four wheels via the AMG 4MATIC+ constantly variable all-wheel drive system, with Drift Mode of course.

Performance figures are also unchanged from before – the E 63 S sedan does the century sprint in a scarily-fast 3.4 seconds, while the E 63 does it just 0.1 second slower at 3.5 seconds. The wagons take 0.1 second longer on both S and non-S configurations.

Inside, the updated E 63 comes equipped with the marque’s latest MBUX system, displayed across two 10.25-inch screens on the base model, while the S models get the larger 12.25-inch units as standard.

The MBUX system comes with an additional AMG-specific display mode (Supersport), along with other vital performance data such as engine output, gear speed indicator, G-meter and Racetimer.

The rest of the interior is pretty much identical to its younger E 53 sibling, with standard kit including the new two twin-spoke design AMG Performance steering wheel with on-wheel integrated buttons and knob, and AMG seats upgradeable to the AMG Performance Seats with integrated head restraints and better lateral support. 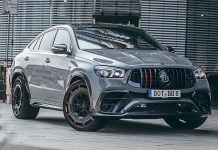