Mercedes-Benz has completed its compact crossover lineup with the introduction of the Mercedes-AMG GLA 45 and GLA 45 S, just two months after the launch of the all-new GLA.

The three-pointed star says that the new GLA 45 twins are “assured masters of a multitude of disciplines”, and it seems like they have the facts to back it up.

The powerplant will be available in two output tunes – the base model delivers 387 hp and 480 Nm, while S-variant produces 421 hp and 500 Nm of torque.

The torque curve of the engine was also balanced, with peak torque available from 5,000 to 5,250 rpm on the S-variant, achieving a power delivery akin to a naturally aspirated engine.

The engine is paired to a eight-speed dual-clutch transmission, with power transferred to all four wheels. Naught-to-hundred km/h is achieved in just 4.3 seconds on the GLA 45 S; the base model takes a hair longer at 4.4 seconds.

At full blast, the base model is electronically limited to 250 km/h, while the S-variant gets to speed up to 270 km/h out of the factory.

Stopping this level of performance requires some serious muscles too, thus as standard the GLA 45 comes with 350 mm perforated rotors in front, paired with four-pot fixed calipers. At the back, single-piston floating calipers squeeze on 330 mm discs.

Unlike traditional AMG cars, the GLA 45 twins are not just about the raw power – Mercedes says that the new performance crossover has a level of dynamic handling that can impress “even sports car owners.”

The adaptive suspensions, along with a reinforced body shell and variable ratio steering rack ensures that the GLA 45 handles like a champ. The fully-variable AMG Performance 4MATIC+ all-wheel drive system with one disc clutch per rear wheel, enhances the performance by providing the optimum traction at each wheel through the corner.

The performance under the hood is revealed by the athletic exterior styling, including the power domes on the bonnet, as well as the muscular shoulder over the flared wheel arches.

Up front, the GLA 45 twins get a AMG-specific Panamericana grille, large air intakes with vertical fins, as well as functional aerodynamic front splitters.

From the rear, you won’t mistake this car as just another GLA too – especially with the quad oval exhaust tips, diffusers, as well as the large roof-mounted spoilers. But of course, the AMG exhaust system is already a dead giveaway.

As standard, the base GLA 45 sits on 19-inch alloys, while the S-variant gets 20-inch wheels. There’s also a 21-inch light-alloy wheels as options.

Inside, you will feel right at home with the sports seats in Artico leather and Dinamica microfibre, finished with yellow accent stitching (on the S-variant) – a nod to the brand’s motorsports heritage.

If you see yourself doing more track driving, the AMG Performance seats are available as options.

The AMG Performance steering wheel with steering-wheel buttons come as standard on the GLA 45 S, allowing the driver to control AMG-specific performance functions directly from the steering wheel.

The MBUX infotainment system on the GLA 45 S also gets several AMG-specific function, such as the AMG Track Pace “virtual race engineer”. The augmented reality system on the MBUX can even overlay the ideal racing line onto a track surface, via a front-facing camera. 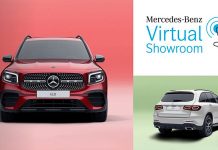