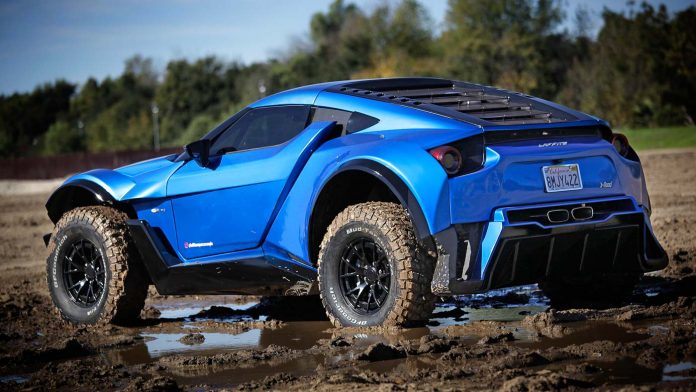 Bruno Laffite, former operations director of the now-defunct Zarooq Motors, took it upon himself to make sure that the off-road supercar dream does not die, setting up the Laffite Supercars company to continue working on the Sandracer.

A little more than two years later, Laffite has now shown off his evolved dune buggy – the Laffite G-Tec X-Road. Yes, it’s a really long name, but there’s a reason to it.

The rolling chassis of the X-Road is developed by G-Tec, a company founded by Philippe Gautheron – renowned race engineer with more than 20 years of experience in various different racing disciplines.

The 6.2-litre V8 engine mounted mid-ship makes 470 hp as standard, but opting for the turbocharger brings the figure up to 720 hp. Power is sent to the rear wheels through a five-speed sequential or a six-speed ‘box with paddle shifters.

The exterior styling is pretty much identical to its predecessor, but Laffite has now given us a look at the interior of the off-road supercar. You’d imagine that an off-road vehicle wouldn’t require luxury, but the leather and carbon-fibre interior of the X-Road proves that you can get dirty in style.

As a whole, the X-Road weighs in at just 1,300 kg. Top speed is limited to 230 km/h – the 17-inch suspension travel will probably be useful when you’re flying through rough terrains at that speed.

There’s a tonne of customisability here, because all 30 units will be built to order at the Laffite factory, based in Los Angeles. If you’re interested, you can even order one with a full electric drivetrain. Though, be prepared to shell out the cash, as the X-Road starts at USD465,000 (approximately RM1.9 million), with the electric version starting at USD545,000 (approx RM2.2 million).