Ever since the new Toyota Supra was launch, enthusiasts and industry observers alike have bemoaned the use of BMW’s B58 turbocharged straight-six engine instead of a newly developed engine by Toyota – a worthy successor to the legendary 2JZ engine.

Word has it that it was down to cost. If Toyota had to develop a completely new Supra from scratch, with a new engine, it would’ve been an expensive endeavour and its retail price would’ve been even higher. Essentially, if this collaboration did not happen, there would be no new Supra to begin with.

That being said, although it’s tried and true that the Supra is no slouch and can still carry the legendary’s nameplate as we briefly discovered on an air strip in Sg. Besi, we can completely understand the charm of a Supra, with a “3JZ”, so to speak.

Now a video has surfaced on YouTube of what seems (or rather sounds like) a V8-powered Toyota Supra undergoing testing, supposedly for Japan’s GT300 series. It sure doesn’t sound like a straight-six nor an inline-four cylinder engine. Watch the video here!

At the moment it’s anyone’s guess where the engine is from and it’s unlikely that we’ll see it on the road-going Supra so don’t be so quick to withhold your booking just yet. 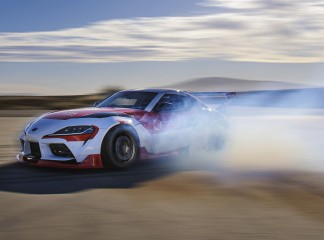