The Nurburgring Nordschleife, affectionately called “The Green Hell” by three-time Formula 1 World Champion Sir Jackie Stewart, is frequently hailed as the most dangerous and difficult race track in the world.

The challenging nature of the course is the reason why many manufacturers and car enthusiast alike regard the track as the ultimate proving ground for a car.

Although there has been some changes to the course over the years, the 20.8 km of tarmac on the Nordschleife layout largely remains the same with its 73 corners and more than 300 metres of elevation change.

Driving through the blind corners with little to no room for error is an impressive feat, and that’s why we were left speechless when we saw German car magazine Sport Auto taking the crazy fast Ferrari 488 Pista around the Nordschleife for an all-out hot lap. Just watch how fast the driver had to react to the car and track through instant micro-corrections:

The 720 hp track monster in the hands of test driver Christian Gebhardt set a blistering lap time of 7:00.03. While the lap is not entering any record books, it is still a respectable time by all means.

Just for comparison’s sake, the fastest lap time by a production car on the ‘Ring is set by the Lamborghini Aventador SVJ at 6:44.97. The recently released “Beast of the Green Hell” Mercedes-AMG GT R did it in 7:10.92.

As the seven minutes lap was not set by a “professional” driver, nor was it officially sanctioned by the manufacturer, it’s not directly comparable to the traditional lap times above. However, with Ferrari usually being mum about official lap times and avoiding record-chasing runs, this might be the best comparison we will get. 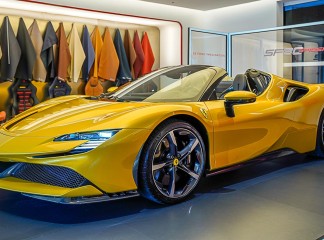