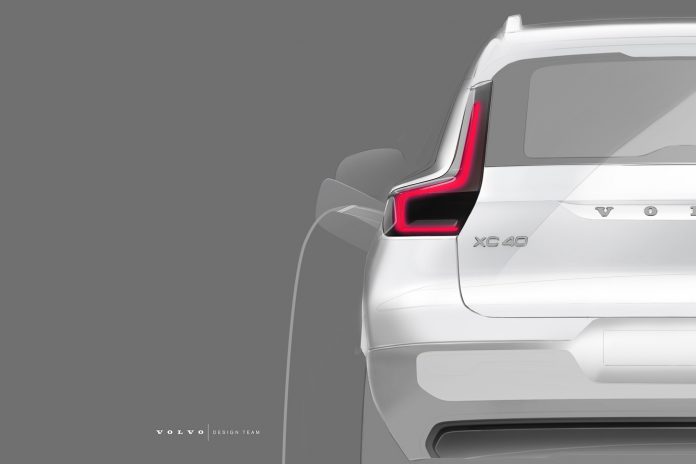 Volvo is set to unveil the pure electric XC40 on the 16th of October. Ahead of its launch, the Swedish carmaker has released more information, this time on how it will look like.

Not surprisingly, we can see that the fully-electric XC40 retains most of the styling of the original car. With their target of achieving 50% electric vehicle sales by 2025, Volvo is focused on offering electric versions of existing models. It’s a good thing then Volvo chose to start with one of their best-selling (and arguably best-looking) models.

From the drawings provided by Volvo, it appears that the battery-powered XC40 follows the trend of most electric vehicles with the removal of the front grille. In its place is a body-coloured panel that also houses the Advanced Driver Assistance System (ADAS) sensors.

Due to the reduced cooling requirement for electric drivetrains, EVs tend to not have traditional grilles and this also improves upon the vehicle’s aerodynamics.

Over at the rear, the electric XC40 is also void of any tailpipes. A redesigned rear bumper gives it a cleaner look on the otherwise unchanged exterior. It will be available in 8 different exterior colours, including a new Sage Green metallic option, while a contrasting black roof comes as standard on all paint jobs. Buyers can choose between two new 19-inch and 20-inch alloy wheels.

The electric SUV will also feature a “frunk” under the hood, due to the move from an internal combustion to a smaller electric drivetrain, which frees up approximately 30 litres of space.

On the inside, Volvo designed a completely-new driver interface, unique to electric vehicles in the pipeline. The interface will carry vital driving information such as battery reserve and the new ADAS system. Expect the cabin to also feature interior trim made of recycled materials.

Built on the Compact Modular Architecture (CMA), the Geely-owned carmaker had to make some changes to the platform to accommodate the new electric powertrain. However, Volvo maintains that there will be no compromises to the cabin space.