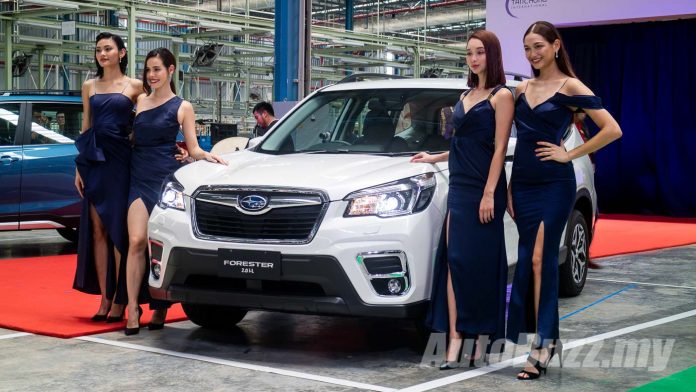 At the opening of the new Tan Chong Subaru Automotive (Thailand) Limited (TCSAT) manufacturing plant in Bangkok, Deputy Chairman and Managing Director of Tan Chong International Limited Glenn Tan has confirmed at a media press conference that the fifth-generation Subaru Forester will not be assembled in Malaysia but instead be fully imported (CBU) from Thailand.

The new Forester is the first model to be assembled a the TCSAT plant and the vehicles will be distributed to the South East Asia region including Thailand, Malaysia, Vietnam and Cambodia. This strategy, as explained by Tan, allows Motor Image to better manage their current Subaru production capacity that is contracted to Tan Chong Motor Assemblies (TCMA) in Segambut.

According to Tan, the Segambut facility has an upper limit for Subaru vehicles of 600 to 650 units per month and that volume is shared between the outgoing Forester and XV bound for the Malaysian and Thailand markets. By phasing out the production of Foresters in Malaysia, the Segambut plant can focus on producing XVs and shorten delivery times for customers.

On whether the pricing of the Forester will be affected with the switch from CKD to CBU, Tan explained: “It is definitely (going to be) more expensive than the current Forester now, but I think we definitely want to keep it competitive and keep it within a similar price range to the competitors.”

“It is not going be (as) cheap as the current model, (it will) definitely go up to a new zone. But we believe that the new car compared to the other competitors in the new zone should be reasonable (priced). We’ve had a similar situation in Taiwan, Philippines, Thailand, Singapore, Hong Kong and we don’t see an issue of the price going up,” added Tan.