Preparations can be made but it’s always safe to expect the unexpected when going off-road. Mitsubishi Motors Malaysia recently organised a test drive of the new Triton in Kota Kinabalu, Sabah and things did get rather hairy.

Unexpected rainfall the night before had turned the hard, gravel surfaces into sticky mud when we got to the off-road trail and while it did provide a solid test for the new Triton, which fared reasonably well, some sections did prove to be a handful.

As such, while the Tritons may have emerged unscathed from the dense jungles, someone did return with a pair of wet pants.

Launched just last month, the new Mitsubishi Triton is without a doubt one of the most handsome pick-ups on our roads at the moment.

Optimisation of the mechanical bits such as the powertrain and the interior with added padding and rear airvents on the headlining for example, had effectively rendered the new Triton a pick-up that’s as accommodating as a car without scarificing its off-road and weight-lifting capabilities.

Unveiled globally in Bangkok at the end of last year, the new Mitsubishi Triton is 10mm longer but 15 kg lighter than before. While it may retain the same engine, it’s now utilising a 6-speed transmission, with larger brakes, dampers and a whole lot of safety features. 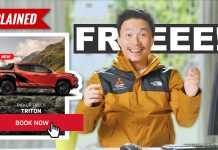