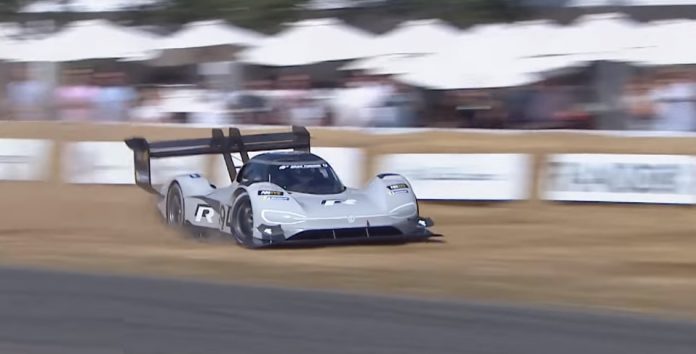 Not content with just smashing the all-time Pikes Peak record last month, the Volkswagen I.D. R race car made its way to the 2018 Goodwood Festival of Speed and proceeded to set a new record for electric vehicles on the infamous hill climb competition along a treacherous 1.86km route lined with trees, stone walls and hay bales.

Romain Dumas, who also piloted the I.D R up Pikes Peak, completed the Goodwood Hillclimb in 43.86 seconds, beating not only the rest of the field but also the EV record by a comfortable 3.48 seconds. But it would’ve turned out so differently if Dumas hadn’t pulled off what must be the mother of all saves during a practice run prior to the record attempt, under the watchful eyes of 200,000 spectators and Volkswagen CEO Dr. Herbert Diess.

“Goodwood is an absolutely fantastic event and I am more than happy that we won in front of such a great crowd of motorsport enthusiasts,” said the 40-year-old Dumas after his record-breaking drive. “The hill climb track is short but often dirty and therefore you should definitely not underestimate it,’ the Frenchman added. So true.

While the all-wheel drive Volkswagen I.D. R now holds the honour of being the fastest EV at Goodwood (and the third quickest ever), the fastest run ever up the hill is still held by Nick Heidfeld who stopped the clock at 41.6 seconds in a McLaren Mercedes MP4/13 Formula 1 racer back in 1999, the V10-powered car which Mika Hakkinen raced to the 1998 drivers’ crown.