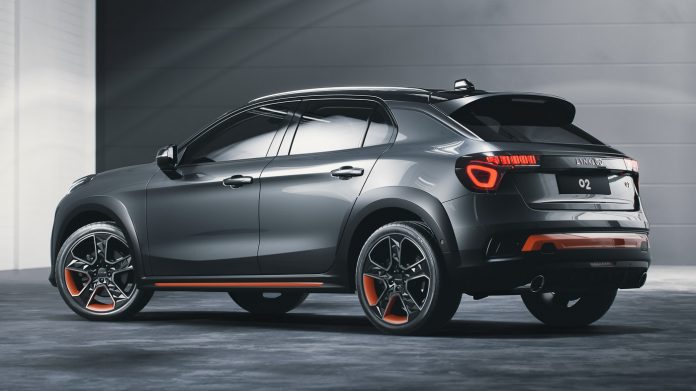 Lynk & Co, the new Chinese carmaker backed by Geely Auto Group, has just announced its latest model, the Lynk & Co 02 compact SUV, positioned as a more stylish alternative to the 01 SUV that was introduced in 2016.

Unlike the 01 that was aimed at the Chinese market, the 02 will focus on urbanites residing in key European cities. Head of Design Lynk & Co, Andreas Nilsson, said: “Sporty, adventurous, dynamic, daring, confident and fun, the 02 sits at the absolute centre of our brand. A shorter wheelbase, lower ride height and centre of gravity – combined with two-tone colour-schemes and softer, voluptuous surfaces, muscular haunches and wheel-arches – give 02 a solid and confident stance while being agile and sporty in character.”

On the outside, we can see that the 02 spots a leaner profile with a more angular C-pillar design compared to its larger sibling. The Lynk & Co family face is also present as are the quirky taillamp graphics. All 02 will come with a two-tone paint scheme. The new car shares the same Compact Modular Architecture (CMA) platform as the award-winning Volvo XC40.

Peeking inside, you’ll find a modern cabin identical to other models in the Lynk & Co range – LCD instrument cluster, central touchscreen display with control knobs tucked under it, multifunctional steering wheel design and more. Some of its design was also lifted off from Volvo models.

Alain Visser added: “Sales started in China late last year, and we quickly established Lynk & Co as a very hot property in cities from Beijing to Shanghai. We intend to make a similar impact in our home European cities with Lynk & Co’s innovative approach to buying, using and owning personal mobility.”

The first European Lynk & Co showroom will open in Amsterdam followed by Barcelona, Berlin, Brussels and London. These brick and mortar facility will be located in central fashion districts, in line with the brand’s fun and youthful corporate image. If Geely’s promise is unchanged, the 02 will also come with a Lifetime Product Warranty and free data traffic access as standard.

Also revealed at the launch is that Volvo Cars will be manufacturing Lynk & Co vehicles at their plant in Ghent, Belgium from late 2019 onwards. By providing Lynk & Co with production capacity at its Ghent plant, Volvo Cars is backing the expansion of the new car brand in Europe and further diversifying its business.

Lynk & Co vehicles share the same CMA platform as Volvo Cars hence the joint production will have a positive effect on economies of scale. At present, the Ghent plant produces the XC40, V40, V40 Cross Country, S60 and will start producing the all-new V60 in time.