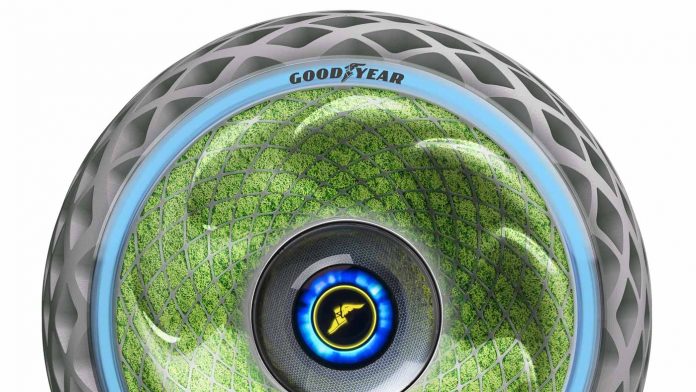 Goodyear has introduced its latest tyre concept at the on-going 2018 Geneva Motor Show with “live plants” growing in them – possibly giving the term “tyre maintenance” a whole new meaning.

It’s called the Oxygene and get this, it has moss growing within the sidewall of the tyres. Also, the tyre’s tread design can absorb and circulate moisture and water from the road surface to allow photosynthesis to take place and therefore releasing oxygen into the air.

In application, Goodyear claims that in a city like Paris, with over 2.5 million vehicles, this would mean generating 3,000 tons of oxygen and absorbing more than 4,000 tons of carbon dioxide.

The Oxygene’s tyre design is supposedly able to improve wet grip as well, with water absorbed through the tread rather than being dispersed like on normal tyres.

It’s also able to harvest energy generated during photosynthesis to power its embedded electronics which include a customisable light strip in the tyre’s sidewall that switches colours – warning both road users and pedestrians of the car’s upcoming maneuvers, such as lane changes or braking.

While it’s established that the moss will be “watered”, question now is, who’s going to trim them?