Home News Nissan turned a convertible 370Z into a snowmobile Nissan has built a one-off snowmobile with the 370Z Roadster ahead of the 2018 Chicago Auto Show and it’s called the 370Zki – pronounced as 370-Ski.

The 370Ski now comes with front skis and rear snow tracks replacing what would usually be high performance tyres. To accommodate the rear tracks, the entire drivetrain had to be removed while a custom lift kit was engineered to lift the vehicle three inches from normal height.

Other modifications include custom mountings for the engine and transmission along with a front skid plate fabricated to prevent damage during snow excursions.

The 370 Z’s factory brakes have been retained but the brake lines have been rerouted while the rear wheel wells were re-engineered for clearance to accommodate the 4-feet long snow tracks. 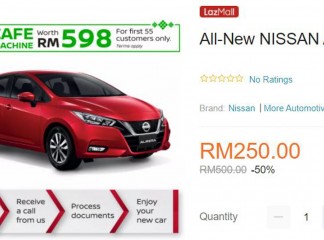 Video: Five things you need to know about the new Nissan Navara facelift!