Home News Watch the Evoque climb a massive speed bump, while others are left... Range Rovers, despite being a premium SUV, housing the finest of materials and latest of technologies, have always been known to be just as competent off-road as it is on the tarmac.

Land Rover decided to emphasise this even more with a publicity stunt taking place in what appears to be on the streets of London. The enormous speed bump bemused drivers and passerbys alike while a plucky Ford Fiesta even attempted to scale what is easily a four to five feet high speed bump.

Notice how even a BMW X3 owner claimed that he wasn’t convinced that his SUV was as good a 4×4. An Evoque then comes along and methodically ascends and descends from the speed bump, to the bewilderment of on-lookers.

On this side of the planet, it just seems like we’re seeing lesser of the Evoque on the road from say three years ago – having been Jaguar Land Rover’s best seller in 2015. Locally, the Evoque is offered with one engine option only, the Si4 2.0-litre turbocharged model we reviewed producing 238 hp and 340 Nm of torque – delivered through a 9-speed transmission. 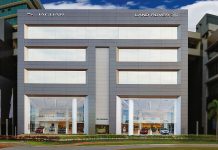