The Mercedes-Benz W176 A-Class has been around for a good part of five years now and Mercedes-Benz has eagerly shown us how the interior of the next-generation compact hatch will look like in this series of official photos.

The interior of the next-generation A-Class will be nothing short of revolutionary, combining styling and technology from its larger siblings. Aimed at capturing a younger group of audience, the new car will be as youthful as ever before but at the same time offering greater practicality and grown-up than its predecessors.

The new A-Class will offer more space in every aspect than the outgoing model, suggesting that the car has grown in size as well. Aside from that, storage capacity has improved significantly as well with the centre cup holder now able to accommodate 500 ml bottles, front door pockets can now fit 1.5-litre bottles or A4-sized magazines and the rear door panel can also fit 1-litre bottles.

The interior architecture and display systems of the new A-Class will set a new benchmark in the segment. Like the E-Class, the new A-Class will get the wide-screen cockpit as standard, available in three configurations: two 7-inch, one 7 and one 10.25-inch or two 10.25-inch displays. The centre console has been decluttered leaving only a single stripe of climate control rocker switches.

Similar to the E-Class Coupe and the upcoming CLS, the new A-Class will also feature turbine design air vents. Other new items include the multifunctional steering wheel design (taken from the S-Class facelift), ring-shaped door handle and Command system touchpad. Other options for the new A-Class include 64-colour ambient lighting (12-colour as standard).

A total of three front seat option are available ranging from sporty AMG to a Multicontour Seat package. Like all Mercedes-Benz vehicles, a range of premium interior finishes like open-pore wood are available.

When the next-gen A-Class makes its global debut, expect the interior find its way to its other compact car range like the CLA and GLA. There is also an A-Class sedan concept that we should look forward to. 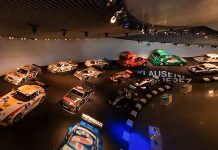