Mitsubishi Motors Malaysia today launched the new locally-assembled Mitsubishi Outlander 2.0 at the Tan Chong Motor Assemblies plant in Segambut where it will be contracted to assemble. Nothing on the new Xpander just yet.

The Outlander was previously launched in April 2016 as a fully-imported CBU vehicle from Japan whereby the 2.4-litre 4WD variant would still be sold alongside the newly launched CKD model.

The Outlander is power by the already-proven 2.0-litre DOHC MIVEC engine with 143 hp and 196 Nm of torque paired with the INVECS-III CVT transmission. Drive is sent to all four wheels with an intelligent 4WD system which will be standard across the range. The system’s Multi-Select function comes with three different driving modes – 4WD Eco, 4WD Auto and 4WD Lock.

Inside the spacious, seven-seater, fabric-clad interior you get 7-inch HD touchscreen infotainment display with Apple CarPlay connectivity with Air Gesture Control. It also comes with a digital video recorder and security tinting while boot space is rated at 1,608-litres with the second and third row seats folded.

The Outlander will be available in Red Metallic, Solar White, and Ruby Black – a new colour for the Outlander exclusive for the Malaysian market.

Introductory prices for the CKD Outlander will be RM 139,988 (OTR without insurance) until year end with Mitsubishi’s 5-year warranty with unlimited mileage. 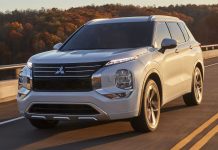