Home News Find out what makes the new Mustang, the fastest ever out of... 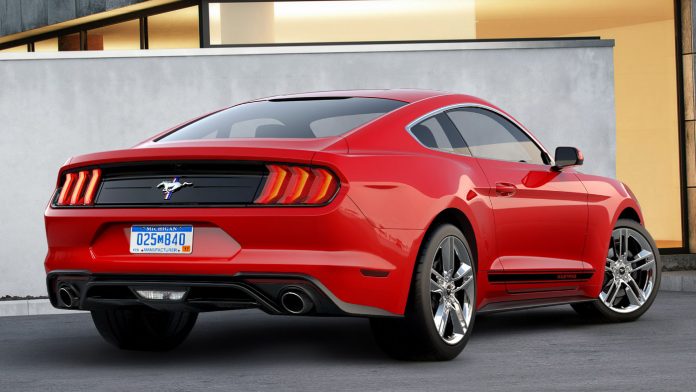 Following our previous article on the upcoming 2018 Ford Mustang, we’d like to add on that Ford has claimed that it would be the fastest yet with its new optional “Drag Strip” mode capable of a 0 to 100 km/h sprint in under four seconds.

The new Mustang’s blinding performance will be also be owed to its new 10-speed transmission and the sure-to-be enticing “Drag Strip” mode. As the most extreme of five driver-selectable modes, its been redesign to provide maximum acceleration and optimising straight-line performance; very American indeed.

“Typically, when you shift gears, you give up time,” said Mustang’s Chief Designer, Carl Widmann. “In Drag Strip mode, the engine torque doesn’t drop when you’re shifting. You get peak engine torque and horsepower straight through thanks to our new Ford-built 10-speed transmission.”

The 10-speed gearbox, yes, it’s still ten and your glasses aren’t foggy, features Ford-patented power-flow and Ford-patented direct-acting hydraulic controls. It’s designed for optimised progression of the gear ratios and efficiency, resulting in more accurate, quicker up and down shift capabilities which is certain to eliminate the lost time and torque usually associated with automatic shifting.

The new Mustang is sure to annihilate all previous stigmas of American muscle cars as it features real-time adaptive shift-scheduling algorithms. All this brain power to go with the brawn ensures the right gear is engaged at the right time, including skip-shift and direct downshift capability, reducing shift times and low-speed tip-in response (a nerdier way of say initial throttle response). The transmission is also uniquely tuned for each of its four other driving modes – Normal, Sport, Track and Snow/Wet.

“Gearing matters, and in Drag Strip mode, this car launches better than ever off the line,” said Widmann, and we couldn’t agree more.