This “musk” be putting Elon at the edge of his seat!

Back in April this year, when Lucid Motors displayed its “Lucid Air” electric car at the New York Auto Show, it claimed that its Alpha Speed Car prototype had reached a phenomenal top speed of 217 mph (that’s 349 km/h for us) at a 12 km test track in Ohio, USA. Not a feat to be taken lightly especially when it matches the top speed of a Ferrari LaFerrari (349 km/h).

All that with the same source that’s powering the smartphone or laptop you’re reading this article with; electricity. That’s not all, the prototype version only reached 217 mph because it was “software-limited”. In other words, it only attained a top speed of 217 mph because of the restrictions by the sorcery of its on-board computers.

That alone would’ve made the Lucid Air one of fastest electric car around. Yet, Lucid claims there is still plenty of room for improvement. And just last week, in efforts to be taken more seriously, Lucid Motors once again took to the same test track in Ohio but this time with the speed limiter software removed.

So who are these Lucid bunch of people (pun intended), you ask?

Lucid Motors (previously known as Atieva) is a start-up founded back in 2007, mainly to develop battery technology before it made the leap to automotive production in 2014. It’s claimed that some of the 300-strong staff currently at Lucid Motors were previously from Tesla, Mazda and other car companies.

There will be two versions of the Lucid Air when it goes into production in 2019. The base model Air is set to produce 400 horsepower solely for its rear wheels with a 240-mile (386km) range while the top of the line “Launch Edition” will have 1,000 horsepower shared among its four wheels and a cruising range of 315 miles (507 km).

Sadly, the speed limit software will not be removed for the road-going versions. 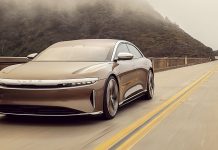