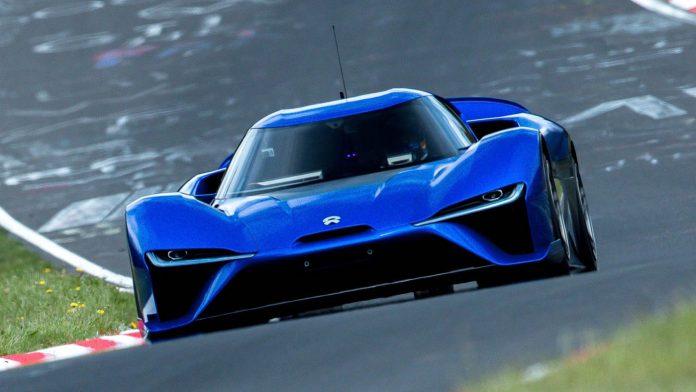 It’s official. The future of automobile is silent and green. Late last year, NextEV (Chinese EV startup) unveiled the world’s fastest EV around Nürburgring Nordschleife – the NIO EP9. Today, the EP9 is also the title bearer of the fastest road-legal car around the Green Hell.

NextEV has just achieved a new record-breaking lap time of 6 minutes and 45.9 seconds, shaving off a staggering 19.22 seconds off its previous record of 7 minute and 5.12 seconds! This makes it the fastest road-legal vehicle to conquer the 20.8 km track. There’s even an on board recording as proof!

To recap, the EP9 is a two-seater full-electric hypercar with a carbon monocoque and aero-driven chassis. It is powered by four electric motors, one on each wheel, to generate 1 megawatt of power, equivalent to 1,360 hp. This allows the EP9 to sprint from 0 to 100 km/h in 2.7 seconds and 0 to 200 km/h in 7.1 seconds. If you have a runway as long as the one in Fast & Furious, the EP9 will max out at 313 km/h.

At launch, only six units of EP9 have been produced for investors, but the company expressed plans to produce 10 additional units, all made to order for interested parties. Want one? NextEV is asking for a cool USD $1.48 million (RM6.4 million).