Since its global debut in 2013, the Jaguar F-Type has always been depicted with a hairy-chested V8 powerplant accompanied by a thunderous exhaust note. People tend to forget that there’s also a V6 variant of the F-Type, but that’s pretty much understandable when the V8 sounds so bloody good. So how does a four-cylinder F-Type sounds like? Blasphemy?

Jaguar has updated the 2018 Model Year F-Type with some interior and exterior tweaks, but the biggest news is the addition of this four-cylinder variant to complement the existing V6 and V8 variants. All F-Type models will get new bumpers and they can be optioned with full LED headlamps, while inside there’s the new lightweight slimline seats and Touch Pro infotainment system.

It’s the same turbocharged 2.0-litre 4-cylinder Ingenium engine already used in other Jaguar and Land Rover vehicles, but for the F-Type it gets the power boosted to 296 hp and 400 Nm. The smallest-engined F-Type may have the least amount of power, but with 148 hp per litre, the turbo four-banger actually has the highest specific power output of any engine in the new F-Type range. Mated to an 8-speed automatic which sends power to the rear wheels, the four-cylinder F-Type does the century sprint in 5.4 seconds and the top speed is 250 km/h.

With a smaller mill occupying the engine bay, there’s a weight saving of 52kg, and apart from making it the most economical F-Type in the range with a fuel consumption of 7.2 l/100 km, Jaguar claims this also contributes to an improved agility. Jaguar also promised that the four-cylinder F-Type won’t be compromised in the noise department, with a “meticulously-tuned” active exhaust to deliver a distinct four-cylinder soundtrack.

There’s very little to tell that it’s the F-Type “lite” from the outside, apart from the center-exit single tailpipe and new lightweight 18-inch wheels. Meanwhile the R-Dynamic option will throw in a set of 19-inch wheels and switchable active exhaust. The four-cylinder F-Type will be available in either a Coupe or a Convertible guise, and it goes on sale this spring in UK, priced from £49,900 (approximately RM276,300). 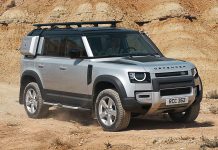 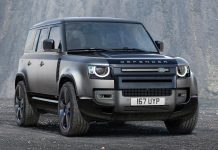