These days you could get a Mercedes-Benz in any shape and size, be it a small hatchback or a 16-foot long SUV, but their core product is inarguably the limousine range. And within that range, there’s the E-Class – the go-to vehicle for successful men (and women) as a portrayal of their flourishing career and good taste.

It’s a proven recipe, the three-pointed star bears the heritage of producing fine carriages, and the positioning of the E-Class between the decadent S-Class and the youthful C-Class hits just about the right spot in terms of size and price. Now in its fifth generation (codenamed W213), it was already named the 2017 UK Car of the Year, Best Executive Car, and New Company Car of the Year, but are those awards enough to capture the hearts of Malaysian businessmen and doctors alike?

Launched here in June 2016, the entire Malaysian W213 E-Class range is powered by the same 2.0-litre four-cylinder turbo with varying states of tune. You could get an E 200 Avantgarde at just below the RM400k mark, but our test car here, the E 250 Avantgarde, retails at RM421k. Another five grand bags you the E 250 Exclusive, while at the top end sits the E 300 AMG Line at RM459k. They’re all fully imported at the moment, but soon they will be assembled locally at the company’s Pekan plant.

There used to be a time when you can easily tell an E-Class from miles away, particularly the front with its quad-eyed face. But now the spotting game just got harder because the designers have streamlined the design on every new model for a more coherent look throughout the entire family.

Although perhaps the E-Class now looks too similar to its siblings. If you’re buying one, we advise you to keep the badge on the boot lid because without it, you might get a confused look from your friends at the country club – great if they thought you just bought an S-Class, but maybe not so when your friends mistook your ride for a C-Class instead.

You might end up having to explain to your friends that, unlike the C-Class, the LED headlights on the E-Class feature two DRL strakes on each side, and the stardust reflectors in the taillights are unique to the E-Class. To put it simply, this could have been avoided if the E-Class had a more distinct styling feature.

Regardless, the W213 is a much sleeker car than the W212 it replaces. From some angle there’s a hint of the original W219 CLS in it, lending it a bit of a “boulevard cruiser” look especially when fitted with these shiny 5-spoke 19-inch alloys. In this Avantgarde trim, the E-Class wears the sportier grille, but those who prefer the traditional grille have to top up another RM5k for the Exclusive trim, which also brings a different set of 19-inch rims. Personally I think the E-Class looks best in Exclusive trim. It inspires just the right amount of old-school charm without looking too elderly.

Open the door and immediately your eyes will be drawn towards the flat horizontal panel on the dashboard. What appears to be a single piece item actually houses two separate 12.3-inch full HD screens side-by-side; the right screen serves as a digital instrument cluster, and the left one is used for the COMAND infotainment system.

You need to refrain yourself from poking the screens because they won’t respond to your touch, but there’s a controller in the centre console that combines a clickable rotary dial and a touchpad for you to scribble on. Alternatively, you could slide your thumb on the world’s first steering-mounted touch controllers. They work brilliantly, although at times you might accidentally trigger them while your hands are busy shuffling the steering wheel.

Both screens are fully configurable with loads of options provided to suit any type of driver. It covers most things from 360 degree camera, analogue clock and dials to web browser, power meter, and navigation map. Furthermore, you are given a selection of 64 available colours for the LED ambient lighting. Warm orange makes you sleepy? Try bright fuchsia or lime green instead, that ought to keep your eyes peeled for hours.

Our test car’s interior is finished in a swanky black and brown colour combo, accentuated by a rather peculiar black ash wood inlays as fitted on the GLC 250 4Matic we tested awhile ago. But one thing’s for sure, the build quality is hard to fault. Even though hard and shiny plastic can be found at the nether region of the cabin, they still feel robust, while the switches and toggles operate with reassuring solidity that they would last for decades.

It’s a nice place to be in (as long as you don’t go bonkers with the ambient lighting and turn it into a night club on wheels) and the rear accommodation is fit for most bosses. There’s plenty of leg room and head room for the two outer seats’ occupants to stretch, although the middle seat passenger’s leg room is slightly restricted by the sizeable transmission tunnel.

Sitting in the back, there’s nothing to fiddle with except for the aircond controls, although the panoramic glass roof does provide a lovely view out. If you want some privacy in the back seats, you can roll out the shades for the roof, side windows, and the rear screen, but don’t get too excited because the seat backs won’t recline. However, they do split 40:20:40 and fold down flat. Behind it, the 540 litre trunk should be able to hold a couple of golf bags and some additional luggage without any issue.

Debuted with state-of-the-art semi autonomous driving tech, the W213 E-Class could practically drive itself and potentially put your driver’s job in jeopardy. What’s more, you can use your smartphone as a remote to manoeuvre the car into a parking spot, and you don’t even have to be in it while doing so.

Sounds awesome right? Unfortunately those features are optional, and they’re not fitted on this E 250. So don’t expect some fancy autopilot tech to take over the wheel as you’re traveling at 110 km/h so you could reply that email from the driver’s seat.

However, you can bank on the new E-Class to deliver first-class ride, because it won’t disappoint you. The way the E 250 deals with rough roads is admirable, even on the standard steel springs and these 19-inch wheels wrapped in low profile rubbers the E-Class never gets flustered. Instead, it maintains its composure, ironing out craggy roads like it was never there.

Around town the E 250 is surprisingly nippy for its size with tight turning circle making you feel like you’re driving a C-Class. Parking shouldn’t be a problem too, there are sensors and surround view camera to aid you, or just leave the task to the Park Assist, it can manoeuvre you into that tight spot by steering the car for you.

As a car that’s geared towards comfort, the handling is safe and tidy with plenty of grip, but it feels a little too big for gung-ho driving on twisty backroads even though the steering is pretty keen. Besides, the auto ‘box doesn’t like to be rushed either. It takes a while to react to your input from the steering-mounted paddles, and the delay between shifts can be rather off-putting for the more spirited drivers out there.

Driven sedately as it should, the E 250 is in its element on the long highways. The smooth ride, together with the combination of the punchy turbo four and the languid nine-speed ‘box makes long distance cruising quite satisfying. While there’s perceptible tyre roar and wind noise at times, I’m merely nit-picking on an otherwise comfortable cruiser.

SO, IS THIS CAR FOR YOU?

If you cover big miles mostly being driven, the base E 200 should be able to transport you to your destination leisurely, although we reckon you should settle for at least the E 250 for that little bit of extra grunt when the need arises. The W213 is also a great alternative if you can’t quite stretch your budget for an S-Class, or simply because you don’t need the bigger brother’s extra girth. Better still, wait for the CKD version if you’re not in a rush, that should slash a few grand off the current asking price. If you prefer to drive your own, the E-Class is all right, but perhaps you should check out the new BMW G30 5 Series, just to be sure.

I didn’t like the E-Class initially, but I’ve been looking at it the wrong way. The E 250 is not a car that would entertain your juvenile shenanigans. Instead, it encourages you to loosen up your anxious mind after putting a hard day’s work with its laid back nature to mollycoddle you back into a relaxed state once you reach home. Alas it’s not something that I would personally spend my money on, but as company car, I’ll have mine in Exclusive trim. 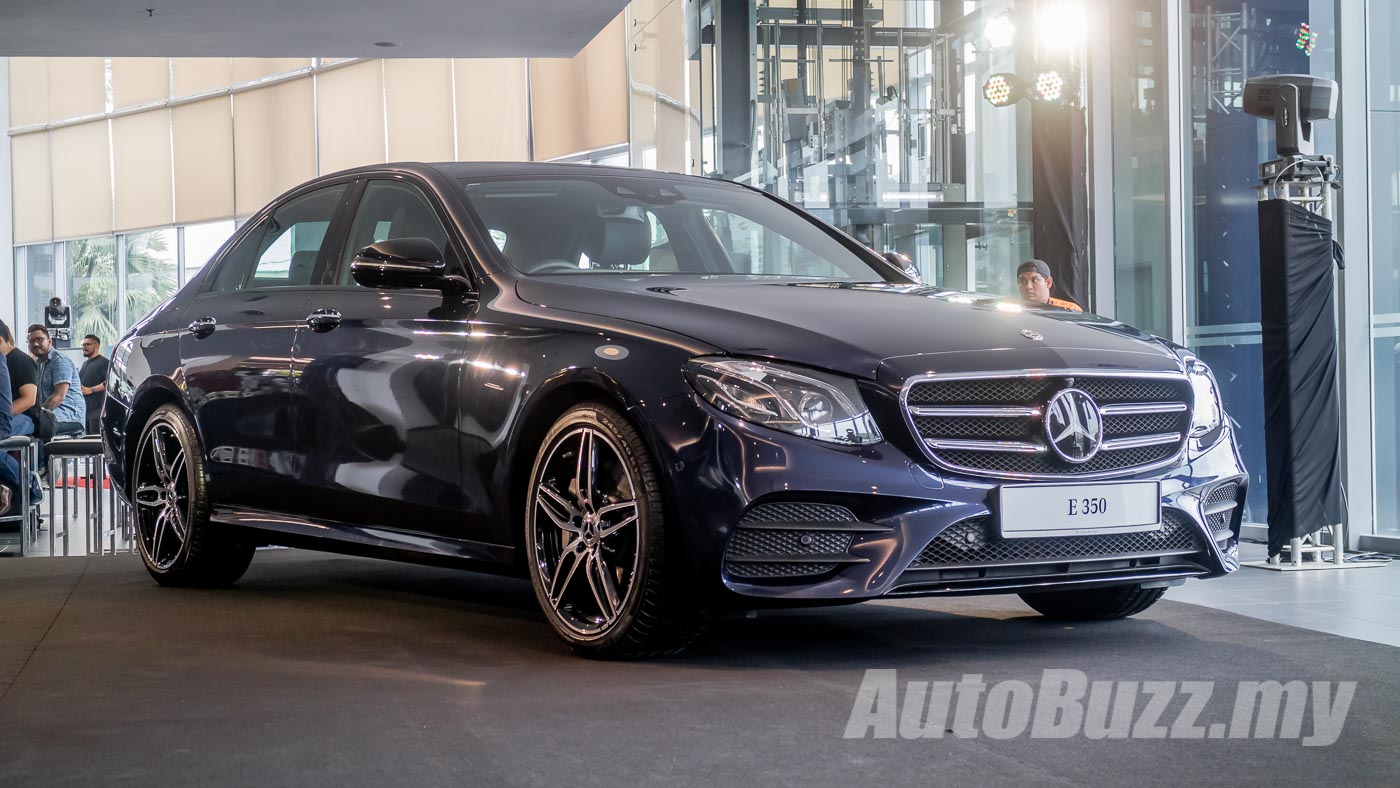