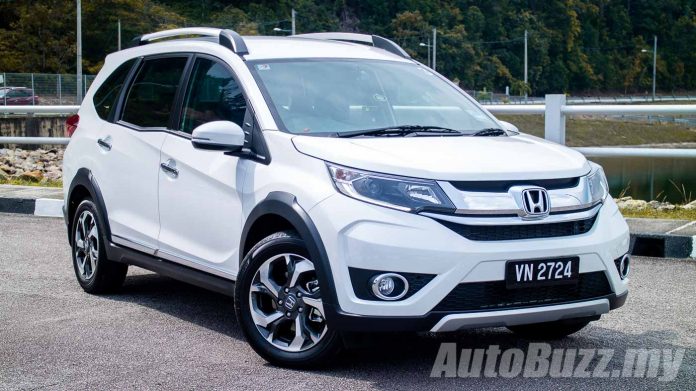 Every once in a while, we come across a car that just becomes an instant hit among Malaysians, be it a foolishly good bargain or a stunningly good looking car. More often than not, the demand for these gems will overwhelm supply. Case in point, the highly tax incentivised W212 Mercedes-Benz S400h and the space-ship like Honda Civic FC; both of which had an extended waiting period shortly after their debuts.

Most of these cases are one hit wonders, two if the manufacturers are lucky. When Honda Malaysia Sdn Bhd (HMSB) launched the Honda HR-V back in 2015, it singlehandedly popularised the compact crossover segment. Strike one. The 10th-generation Honda Civic revitalised the shrinking C-segment sedan market and became the most popular C-Segment sedan in Malaysia. Strike two.

With the newly introduced Honda BR-V, a B-segment seven-seater, Honda raked over 8,500 bookings of it in two short months. If that’s not a hat-trick, I don’t know what is. Surely, with over 8,500 individuals putting their money down, you can’t go wrong with the BR-V right? We join Honda Malaysia for a drive up to Penang Island to find out.

HMSB has kindly prepared 10 units of the range topping V-spec BR-V for the purpose of this drive. However, it is worth mentioning that both the entry level E-spec and V-spec share most of the features and differ very little in creature comforts. Mechanically, both variants are powered by a 1.5-litre naturally aspirated four-cylinder SOHC with i-VTEC, pushing out 118 hp and 145 Nm of torque. Drive is sent to the front wheels through an Earth Dreams CVT.

The extra RM7,000 for the V-spec BR-V makes all the sense once you step into the cabin. Inside, you’ll find a neat cabin with quality finishing, which is definitely a welcome surprise for cars in this segment. The leather upholstery and 6.1-inch touchscreen infotainment system elevate the impression of the cabin. Mind you, the leather, although a mix of synthetic leather, feels good in quality. However, the 6.1-inch infotainment system’s user interface feels a tad dated and does not operate as crisp as the one found on the Toyota Sienta.

Regardless, the additional creature comforts found in the V-spec BR-V such as push start, steering wheel audio controls, reverse camera and automatic climate control all give a nice touch of convenience as a daily driver.

Getting in and out of the Honda BR-V is convenient for most people, but elderly folks would find ingress not as comfortable due to the relatively high ground clearance of (31 mm taller than the CR-V). The Sienta, with its powered sliding doors and lower side step makes ingress and egress a more convenient affair. Although, the ground clearance certainly helps in clearing all the bumps and humps that our roads are notoriously known for.

Hop into the second row and the sliding and reclining function offers great amount of flexibility for a comfortable seating position. The ceiling mounted air vents with dedicated blower controls are certainly not an afterthought because the rear passengers will definitely feel the chill. The third-row seats will satisfy averaged height adults just fine, even on long journeys. I had ample knee and head room in the third row, as did the second row occupants.

However, if you’re planning on a weekend getaway for seven, be prepared to pack light as the boot space, while measures at 223 litres (with all the seats folded up), is very shallow, meaning most of the luggage will have to be in upright position to be able to fit into the back of the BR-V. With the rear seats folded down however, boot space expands to 539 litres and wouldn’t be an issue to fit in a massive amount of cargo as demonstrated in the picture.

If you have the right equipment to strap extra cargo onto the roof rails, Honda has spent massive effort in ensuring that the roof rails are able to support up to 30kg of load.

Another major concern for most buyers would be whether the puny 1.5-litre naturally aspirated four pot from the Honda City is up to the task of moving this people carrier. Despite putting out only 118 hp and 145 Nm, it was enough to take the BR-V up to the last number on the speedometer. Those who intend to ferry seven would not have to worry about getting up to cruising speed.

According to Atsushi Arisaka, Project Leader for the BR-V, Honda’s move of equipping a CVT instead of a regular slush box is to provide consistent power delivery across the rev range, thus improving acceleration under load. And in practice, this formula compliments the seven-seater compact crossover very well.

Arisaka-san added that during the development phase, they focused on acceleration, handling and interior packaging – in that very order. On trunk roads between Tanjung Malim and Ipoh, the BR-V maintained its composure surprisingly well with minimum body roll. Steering feedback from the BR-V was unexpectedly decent for a car that accommodates seven.

BUT WHAT ABOUT SAFETY?

To demonstrate the breadth of the BR-V’s ability, Honda devised an instrumented test called Emergency Lane Change exercise. At a speed of 50 km/h, the BR-V managed aggressive manoeuvre without so much as breaking a sweat. Even as I increased my entry speed to 70 km/h, the BR-V managed the manoeuvre with little drama. Even if you so dare prod the mechanical limits of the BR-V, its Vehicle Stability Assist and dual frontal airbags should keep you and your passengers safe.

If you’re still not convinced that this is an impressive feat, allow me to give you a little perspective: we drove the Nissan Grand Livina during the same session and it spun 180 degrees at just 60 km/h. Even at the expert hands of Ivan Khong, the lead driving instructor and motorsports veteran, the Nissan fared the same. Proving once again, this is not just a half-baked, stretched Honda Brio.

As mentioned earlier, the BR-V is a compact crossover with good driving dynamics. Grip levels were high with the limitation of mechanical grip available from the Bridgestone Ecopia EP150 eco tyres. Due to the tall ride height and large body, the BR-V is susceptible to wind drift at speeds above the legal speed limit, though this shouldn’t bother most people. The plus side is, the cabin is well insulated at high speeds, a trait unique to the Malaysian market as HMSB has added additional sound deadening materials for better NVH levels.

Like all CVT-equipped cars, the transmission works best with a gentle right foot. Hard on the throttle and the gearbox stays in the high end of the rev range, which causes an unpleasant noise. Drive it sedately and you will be rewarded with a refined and comfortable journey.

Over bumps and humps, the BR-V is well sorted and the ride leans on the plusher side despite its astonishing handling capabilities. Families that upgrades from cars a segment below will be pleasantly surprised.

JUST WHAT ARE ITS FLAWS?

The one thing I simply can’t get over is that its rear end looks like an Autobot’s face, and the overly tall ride height. But in all honesty, those are subjective, and the BR-V is a well packaged car that is more suited for families with an active lifestyle. It handles well, rides comfortably and most importantly versatile.

Be it for those balik kampung journeys, fishing trips or even for some light camping, the BR-V will be able to accommodate most, if not all your lifestyle needs. It will fit seven adults without complaints and kids will be happy to be in the back seats of the BR-V. It truly is as versatile as you are.

To plug the Toyota Sienta as the BR-V’s closest rival is an unfair comparison for the two. Yes, both fall under the same price bracket and yes, both can ferry seven people in one go. But they each serve a distinct group of individuals whose needs vary few and far between.

For the active and outgoing families, the BR-V is definitely the most ideal alternative to a sedan. However, if you’re constantly ferrying senior citizens and use the back seats nine out of ten times, perhaps the Toyota Sienta makes better sense.

With bookings already way over the 8,500 mark and a waiting period of two months, the BR-V is no doubt an instant hit with Malaysians. Perhaps the only question you should ask yourself before buying this is: how are you going to use your BR-V?