We’ve seen the engine, we’ve heard it on track and we’ve even seen it out in the open. It’s finally official, McLaren’s second-generation Super Series supercar, codenamed P14 is called the 720S.

Unveiled to the world at the Geneva International Motor Show, the 720S is a new interpretation of the British carmaker’s design language and raises the bar for supercar performance. The new design direction is a reflection of McLaren’s pursuit in aerodynamics, and every panel was purposely sculpted for maximum aero efficiency. Unlike previous McLarens with side air intakes at the rear wheel arches, the dihedral doors of the 720S features a unique “double-skin” design that channels air directly into the radiators without relying on side air intakes.

Up front, the LED DRLs no longer look like the signature swoosh we’ve come to adore. Instead it gets a single horizontal DRL. At the rear, the twin oval tail pipes’ design is a nod to the hardcore 675LT. Besides that, the active aero wing – which doubles up as an air brake during hard braking – is now a full-sized piece, similar to the ones on the 675LT.

The dihedral doors of the 720S now extend into the roof, just like the legendary McLaren F1. The roof section sports a small glass panel for natural light to enter the cabin. Inside, the cabin is smothered with fine quality materials. A new infotainment screen, redesigned steering wheel, repositioned gear selector and centre storage space all give the 720S a more ergonomic interior.

For drivers who are keen on taking their 720S on track and would like to have an unobstructed view of the roads ahead, McLaren’s new Folding Driver Display can switch between the large LCD Central Infotainment Screen and the track-inspired slim display. In Full Display mode, the 8-inch TFT display delivers crisp and clear information whereas in Slim Mode, the TFT display retracts and leaves a horizontal bar that feeds the driver with engine speed and gear for minimum distraction.

Tasked with stopping this monstrous machine are carbon ceramic discs (390 mm front; 380 mm rear) that can bring the car to a complete standstill from 200 km/h in just 4.6 seconds with a distance of 117 meters. An all new Proactive Chassis Control (independent adaptive suspension) and McLaren Carbon Fibre Monocage II give the 720S the higher levels of grip and balance.

Retail prices for the 720S start from £208,600 (RM1.13 mil) before options. Three trim levels are available at launch – Standard, Performance and Luxury. However, if you’re feeling adventurous with the specifications, McLaren Special Operations (MSO) will always be more than glad to welcome you at their doors. 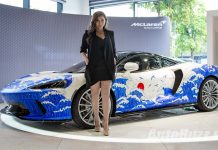