Home News Borneo Safari 2016: This Isuzu MU-X will go places you will never... Many years ago, there was an annual event called the Camel Trophy. This extreme off-road event pits men and Land Rovers to Mother Earth’s toughest obstacles, ranging from rainforest to deserts. That event has been long discontinued, but closer to home there’s something similar, and it’s called the Borneo Safari. This time, Isuzu is dispatching their SUV, the MU-X to traverse a path not many dare to follow.

This specially modified MU-X, known as the `Monster’, will lead Isuzu Malaysia Sdn Bhd’s four-vehicle team in this exhibition. Modifications to this MU-X are mainly the addition of large kangaroo bars and the fitment of bigger tyres. The MU-X’s turbocharged 2.5-litre VGS diesel engine and the five-speed automatic gearbox, are bone stock.

Also, they need to extract every ounce of the MU-X’s talent as the path for this year’s event is not for the faint-hearted. The terrain will see them cover the grounds along the base of Mount Kinabalu and stretches across the districts of Ranau and Kota Marudu. This also includes nearly 40km of hardcore trails comprised of dense forest paths, abandoned logging trails, and several river crossings.

Isuzu Malaysia Sdn Bhd Executive Director Hajime Machimura said, “Although it is a lifestyle SUV, the Isuzu mu-X shares the same tough DNA as our Isuzu D-Max pick-up, which has repeatedly proven itself in every edition of Borneo Safari since its debut in 2005.  It is definitely all set for more.”

This year’s Borneo Safari will kick start from 30 October to 6 November. Best of luck, Isuzu! Meanwhile, do you think the MU-X is good enough for your daily needs? Take a look at our video below or do read our review here. 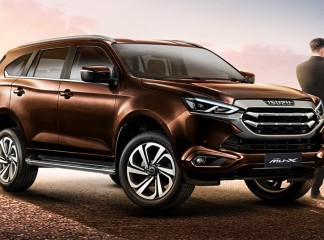