Toyota Vios, UMW Toyota Motor’s bread and butter model, their best-selling model for the past 13 years is under tremendous pressure in recent years. Facing competition not only from better equipped cars in the A-segment such as the recently launched Perodua Bezza and Proton Saga, B-segment rivals with strong unique selling points and even some C-segment sedans that undercuts the price tag of the Vios. UMW needs to up their game to keep the Vios relevant.

Unveiled in the 2016 Bangkok Motor Show, the Land of Smiles first received the facelifted Toyota Vios. Though calling it a facelift would be an understatement because besides aesthetics upgrades, the Vios is given a new engine, new transmission and – a first for the Vios – Traction Control (TC) and Electronic Stability Control (ESC). Fast forward to today, UMW Toyota has finally launched the improved Toyota Vios facelift.

This new facelifted Vios when placed next to the outgoing model can make a challenging game of spot the difference. Changes to the car are subtle but impactful. All variants come with LED daytime running lights that are mounted on the front bumper, door visors, rear fog lamps and keyless entry.

Starting from the top of the line TRD Sportivo, it gets an aggressive TRD Sportivo aero kit for the front bumper, side skirts, rear bumper and a trunk spoiler lip. There are also smoked projector headlamps, black front grille, front fog lamps and power folding wing mirrors with integrated turn signal. The TRD Vios also comes with an acoustic windshield glass.

The E variant settles for a pair of manual levelling halogen reflector headlamps, body coloured front grille and regular windshield instead of acoustic glass. Lastly, the J variants mirrors the E variant but loses out on front fog lamps.

Inside, the Vios remains visually similar except for some minor feature updates. All variants now come with keyless start button, black interior theme as well as illuminated front foot wells. All but the J manual variant come with an Eco drive indicator.

The TRD gets leather combination seats with TRD Sportivo embroidery while the GX and G get the same seats, although the former is finished in black and saddle tan as opposed to the all-black upholstery of the latter (minus the embroidery).

New to the Vios range is a 6.8-inch touchscreen DVD head unit with reverse camera for the TRD to E variant. The base models get a simpler 2-DIN head unit as standard. TRD to G models get six-speakers while the rest gets four instead.

Despite it being new engine, power and torque actually went down. The new 2NR-FE engine is now rated for 106 hp and 140 Nm, down from the previous 107 hp and 141 Nm figures. Power is sent to the front wheels via a Continuous Variable Transmission (CVT) with seven-speed sports sequential shiftmatic.

Despite the lower output, the new heart is more efficient in getting up to speeds and boasts 18 percent better fuel economy compared to the old powertrain. No official fuel consumption figures were quoted, but it’s good enough to earn the locally assembled sedan the EEV incentives. Thanks to that, the Vios is now cheaper between RM1,400 to RM3,600.

Thanks to the CVT, the new powertrain does not suffer from shift shocks. In other words, a dip in torque when a conventional torque converter shifts into a higher gear. This in turn keeps the torque curve flat and consistent allowing for smoother and quicker accelerations.

Speaking to Sean, the Product Planner Manager for the Toyota Vios, he expressed that the CVT is optimised for low speed efficiency and bursts of acceleration. During low speeds, the rev is maintained down low to maximise efficiency and comfort. On the other hand, should the driver require sudden accelerations with a heavy throttle, the CVT immediately puts itself into the highest rev range for maximum power. The reasoning behind this tuning is to improve NVH levels by keeping the engine at a low rpm, effectively reducing CVT whine yet able to deliver strong accelerations when needed.

UMW has done a great job in significantly improving the safety levels on the facelifted Vios by fitting ESC with TC as standard on all variants. Besides that, ABS with EBD, BA, three-point seatbelt for all three rear passengers and ISOFiX mounting points also come as standard. Unfortunately, airbag count remains at two.

The Vios can be had in six different exterior shades – Medium Silver Metallic, Silver Metallic, Attitude Black that are carried over from the previous Vios with Crimson Spark Red Metallic and Super White II as new additions. The White Pearl CS is a new exclusive colour for the TRD Sportivo.

Customers who purchase the facelifted Vios before 31 December 2016 will receive a complimentary 5-Year basic service package on top of the 5-Year unlimited mileage warranty. 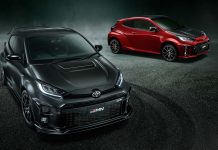