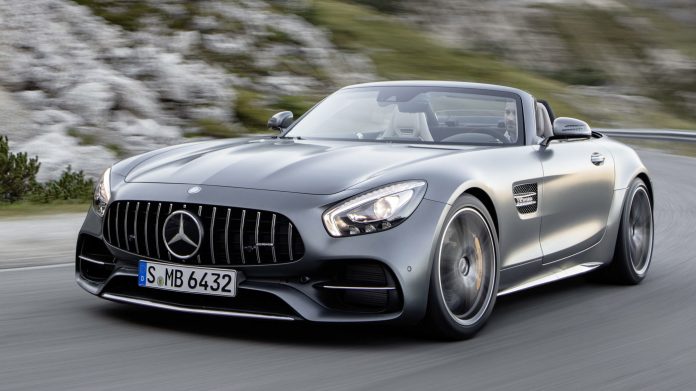 Revealed ahead of the upcoming Paris Motor Show, the two roadsters will feature a fabric roof that folds down in 11 seconds at speeds of up to 50km/h. The GT Roadster will sit alongside the base AMG-GT variant while the GT C will slot between the AMG GT S and the AMG GT R. This brings the total number of AMG GT variants on offer to five.

The fabric roof on both the models are supported by a mixture of magnesium, steel and aluminium structure. This makes the roof  light yet rigid at the same time. An aluminium cross-member with rollover bars provides additional rollover protection.

Besides that, AMG has taken great measures to ensure the safety, rigidity and dynamics of the roadsters are on par with their hard top siblings. New aluminium material mix is used to strengthen the chassis and body further, while the front deck is reinforced with magnesium. Elsewhere, greater wall thickness on the side skirts, more chambers, additional struts and a strut tower brace further reinforce the already rigid body structure.

For the GT C, much of its revisions are taken straight off the GT R. The front grille for example is identical to the GT R. It also features active air management where the grilles close to aid aerodynamics or open to channel more air for maximum cooling.

Unique to the GT C is an updated AMG SPEEDSHIFT DCT seven-speed sport transmission. The first gear now has a higher ratio while the seventh gear and final drive have a lower ratio. This exercise is to complement the increased output from the twin turbo V8. In the GT Roadster, the AMG DYNAMIC SELECT switch comes in four different modes: Comfort, Sport, Sport Plus and Individual. The GT C adds on a Race Mode for optimal track performance.

Standard on the GT C is a Variable AMG Performance Exhaust that draws out the raw symphony of the V8. The GT Roadster can have this exhaust as an option. An AMG Sports Suspension comes as standard on the GT Roadster, while the GT C benefits from a more sophisticated adaptive AMG RIDE CONTROL sports suspension.

Both the roadsters can be had in 11 different exterior shades to match either a black, red or beige soft top. Having a roadster means you will be exposing the interior when the roof is down. As such, having 10 different interior colours will surely satisfy those who intend to make a statement. Closer to home, Mercedes-Benz Malaysia has the AMG GT S on offer.