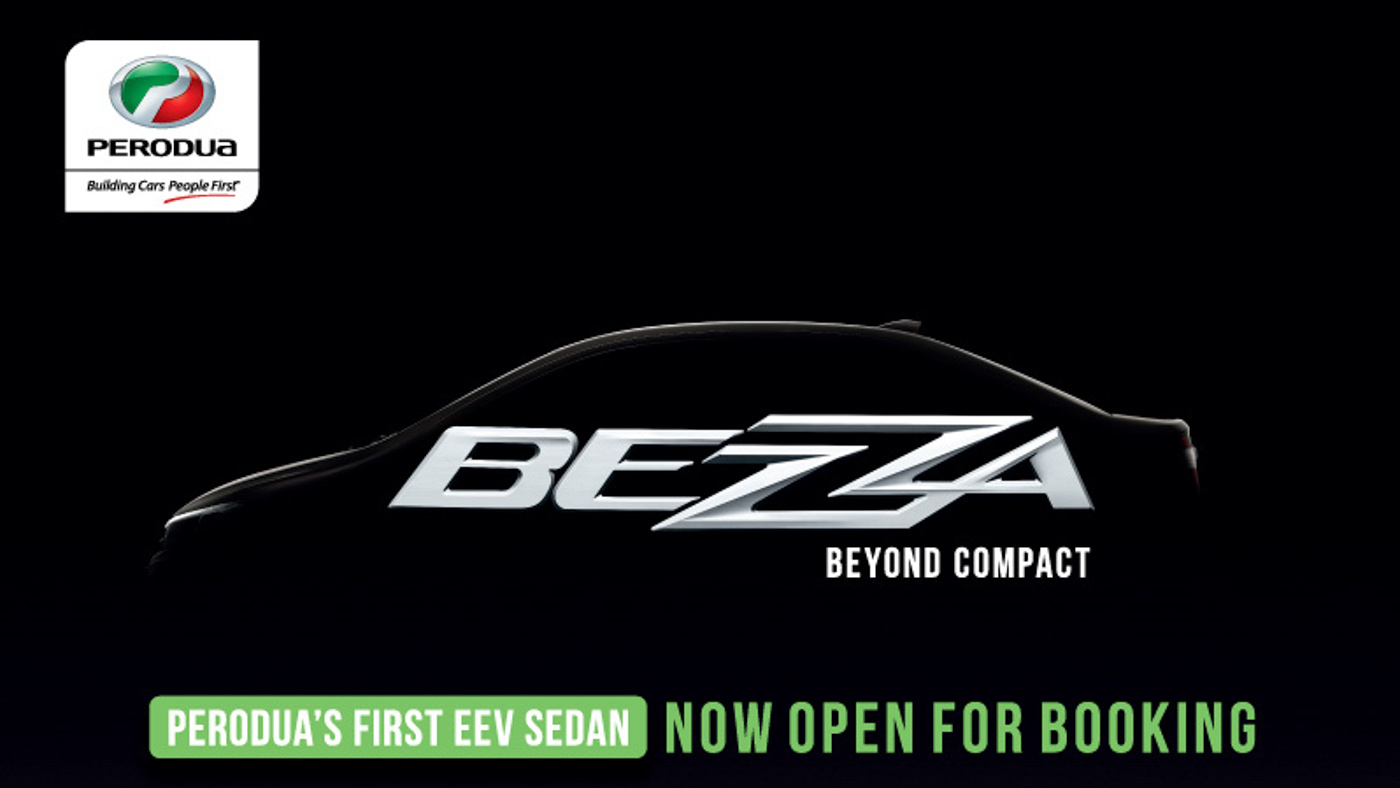 This year’s most anticipated car launch in Malaysia will undoubtedly go to Perodua. Malaysia’s second car manufacturer and the country’s current undisputed automotive leader rarely launch new models but when they do, it’s the motoring equivalent of a Hollywood summer blockbuster (in Malaysia, that is). Soon, Perodua is writing a new chapter in its 22 years of history with the unveiling of its first compact sedan, the Perodua Bezza.

Over here, we are sharing ten things we already know about Perodua’s latest darling with a boot, which was formerly known as the “D63D”.

Taken from the Malay language “Beza“, which means different, Perodua markets its first passenger saloon as “distinctively different“, which is valid since this is the company’s first ever sedan model in its 22 years of existence. More cheekily, the numeric “22” represents the double “Z”, indicating the number of years it has been around.

2. First Perodua vehicle designed by themselves!

The Bezza is not only the Perodua’s first Energy Efficient Vehicle (EEV) saloon but also the company’s first self-designed car. In the past, Perodua cars are either rebadged Daihatsu/Toyota models or joint-developed with its Japanese partners, like the Myvi. It’s not so much the case for the Bezza because Daihatsu does not have any in its lineup.

Having partnered for 22 years, it speaks volume about the two entity’s working relationship, seeing how much flexibility and freedom the Japanese is giving to Perodua. Though the Bezza may be completely designed locally, technologically and mechanically, it’s some of Toyota’s best.

The  development of the Bezza can be traced way back before 2010, with the Bezza prototype unveiled at the 2010 Kuala Lumpur International Motorshow (KLIMS) and subsequently the Buddyz in 2013’s edition. It appears that it’s more than just adding a boot into the Axia’s back.

Perodua’s core strength has always been interior space, and we can expect the Bezza to continue impressing us on that front. It even has a class leading boot space of 508 litres! This is honestly amazing, and it could easily put a few B and C segment sedans to shame.

With its class-leading boot space and spaciousness for five, how will the Bezza handle a fully loaded ‘balik kampung‘ journey?

As seen in Perodua’s website, the Bezza can be had in three variants: Standard G, Premium X, and Advance. In total, there are five specs for buyers to choose.

The entry-level begins with the Bezza Standard G which runs with the three-cylinder 1.0-litre 1KR-VE engine. That’s an upgraded version of the 1KR engine that powers the Axia, and new to the Bezza’s engine is variable valve timing (VVT-i). Specification wise, the 1.0-litre engine outputs 67 hp and 91 Nm of torque. While the new engine is a marginal improvement of 1 hp over the Axia, fuel consumption improved by 6 percent to 21.3 km per litre.

Meanwhile, the Premium X and Advance variants are offered with the 1.3-litre engine, and this lump is not the same one used in the current Myvi. The four-cylinder 1.3-litre 1NR-VE engine is manufactured in Perodua’s new plant in Sendayan. It’s also a Dual-VVTI unit which generates 94 hp and 121 Nm of torque. It’s more powerful than the old K3-VE unit, but fuel consumption improved by 32 percent at 22 km per litre. Currently, this 1.3-litre engine is used by the facelifted Toyota Avanza and the Bezza will be the first Perodua car to be equipped with this unit.

5. It can travel from Kuala Lumpur to Penang and return with one tank!*

The Bezza’s frugality will pay dividends for those who often travel on a budget. While it’s uncertain how large the Bezza’s fuel tank is, Perodua has announced that the Bezza can potentially travel close to 800km with just one tank of fuel!

This is partly because of its low drag coefficient (cD) of 0.286, making it the most slippery Perodua ever. Also, the inclusion of ‘Eco Idle’ makes quite a difference here. Available only for the range-topping Advance variant, this system automatically stops the engine when it’s idling, and will reactivate when your foot is off the brake pedal. It can be deactivated through a button on the dashboard.

Another feature worth mentioning is the regenerative braking system. The is usually found in hybrid cars, where it recovers kinetic energy lost during braking to recharge the battery. This will prolong battery life and at the same time reduce the alternator’s load. In the long run, it saves fuel as the engine is less burdened by the alternator.

Usually, equipments and features in budget compact sedans are nonexistent in order to bring the price down. That’s not really the case with the Bezza, as it’s packed with a decent equipment list, that is if you choose the more expensive variants. The premium will grant you quilted leather seats and ‘Smart Link’ touchscreen infotainment system that supports Bluetooth connection, Waze, Google Maps and other Social Media apps. All 1.3-litre variants meanwhile, will receive push/start button.

The result? ASEAN NCAP five-star rating for the Advance variant while the other two variants are just one star down with a four-star rating.

For every car launch, everyone waits for the price with bated breath. We won’t even have to wait for the day now because Perodua has revealed the pricing for all three variants:

Available in six colours, the Bezza, for what it’s worth, can be considered as the most value for money sedan in the country. In fact, bookings can be made across all Perodua showrooms nationwide and is effective immediately.

Want to spice up your Bezza? Look no further with Perodua’s GearUp accessories package!

With all the information gathered here, the only thing that’s missing is the car’s images. Fortunately, we don’t need to wait any longer as the Perodua Bezza will be unveiled in all its glory this coming Thursday. AutoBuzz.my will be there to cover the launch, so stay tuned for our live coverage of the launch of Perodua’s most important game changer!